(Reuters Health) – An inexpensive antibiotic used to fight acne appears to delay the development of multiple sclerosis in people in the earliest stage of the crippling disease, according to a Canadian study.

Treatment with the generic tetracycline drug minocycline produced fewer cases of MS after six months compared to people given a placebo. The drug was tested in 142 patients who had shown some early symptoms, but the disease had not been confirmed.

The benefit was also seen after one year of therapy, but not after two years, said chief author Dr. Luanne Metz of the University of Calgary’s Hotchkiss Brain Institute. 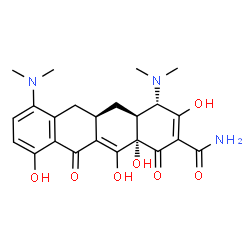 “We did not have enough patients at 24 months to know whether the drug was still doing anything or not,” she told Reuters Health. Further tests would be ideal but paying for them will be difficult because no pharmaceutical company stands to make a lot of money from this use for the generic drug.

Generally, two out of three patients with the early signs of multiple sclerosis, known as clinically isolated syndrome, go on to develop MS within six months. The disease attacks the insulation protecting the body’s nerves.

In the new study, the six-month risk of conversion to MS was 33.4 percent with 100 mg of minocycline twice daily versus 61.0 percent in the placebo group. When the researchers adjusted for the results of MRI scans, the odds rose to 43.0 percent with minocycline but stayed the same with placebo.

Yet after two years, the unadjusted risk was comparable in the two groups, raising the possibility that the benefit may not last.

“It’s a very inexpensive medication – less than C$2 per day – that can be initiated immediately,” coauthor Wee Yong told Reuters Health. “We know that time matters in MS. With the passage of time, the immune insults on the brain continue. I see this as potentially a game-changer in terms of overcoming the challenges of time against MS.”

In addition, the drug could help patients in areas of the world that don’t have access to the more expensive drugs for multiple sclerosis, he said.

“Overall, the findings from this trial suggest a potential clinical benefit of minocycline in early multiple sclerosis, with an effect size similar to that of existing disease-modifying treatments,” said Drs. Zongqi Xia of the Pittsburgh Institute of Neurodegenerative Diseases and Robert Friedlander of the University of Pittsburgh School of Medicine in an editorial in the New England Journal of Medicine, where the study appears.

According to the National Multiple Sclerosis Society, people who experience neurologic symptoms for at least 24 hours and those symptoms are caused by a inflammation or a loss of myelin in the central nervous system may – but not always – progress to MS.

In the new test, done at 12 Canadian MS clinics, all volunteers had at least two brains lesions larger than 3 millimeters. The study team used minocycline because it has anti-inflammatory properties and, unlike most drugs, it crosses the blood-brain barrier.

Among the minocycline side effects: dizziness (seen 10 times more often than in the placebo group), rash (which was 5 times more common) and dental discoloration (seen in 6 of 72 patients but none in the 70-member placebo group).

Six people in the minocycline group withdrew from the test because of side effects versus one person in the placebo group.

“Most people stay on it and tolerate it very well,” Metz said. Side effects usually fade over time to the point where “it’s tolerated much like taking a vitamin pill.”