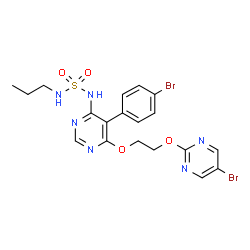 In MERIT, 80 inoperable CTEPH patients were randomized 1:1 to receive either macitentan 10 mg once daily or placebo. After 16 weeks the treatment effect was a significant 16% reduction in pulmonary vascular resistance (PVR) with macitentan compared with placebo (95% CL: -30%, -1%; p=0.04 intention-to-treat (ITT)). The efficacy observed was consistent across all sub-groups, included patients receiving background PH specific therapy at baseline (61%), including PDE-5 inhibitors (59%). Mean PVR decreased from baseline in both macitentan and placebo groups (geometric mean percent ratios of Week 16/baseline 73.0% and 87.2%, respectively).

The study also showed a significant positive effect of macitentan compared to placebo on exercise capacity. After 24 weeks of treatment, the mean change in 6-minute walk distance (6-MWD) from baseline was an increase of 35 meters (m) in macitentan and 1 m in placebo. The 6-MWD least-squares mean difference at Week 24 was 34.0 meters between macitentan and placebo (95% CL: 2.9, 65.2 m; p=0.03).

Guy Braunstein, Head of Global Clinical Development at Actelion, commented: “Inoperable chronic thromboembolic pulmonary hypertension is associated with a poor prognosis if left untreated, and additional therapeutic options are needed for these patients who are not candidates for surgery. I am very pleased that the study has shown a significant decrease in PVR with macitentan and by the significant improvement in exercise capacity. I would like to thank everyone who has participated in this study. The company will now fully analyze the data and discuss the findings with health authorities.”

The MERIT safety set comprised 80 patients, who received at least one dose of study treatment, 40 patients in each macitentan and placebo groups. All 40 patients in the macitentan group and 34 patients in the placebo group completed the protocol-defined treatment period of 24 weeks. Macitentan was well tolerated in this patient population and safety was in general consistent with the known safety profile for macitentan from previous clinical studies. The most frequently reported adverse events that occurred with higher frequency on macitentan vs. placebo were peripheral edema (22.5% vs. 10.0%) and events related to anemia (17.5% vs. 2.5%). Hemoglobin decreases were observed in both macitentan and placebo groups and in only one subject in each group hemoglobin values decreased below 100 g/L during the study. Three (7.5%) patients on macitentan experienced a serious adverse event compared with seven (17.5%) patients on placebo. No elevations of liver aminotransferases greater than three times the upper limit of normal were observed in the study. All treatment discontinuations occurred in the placebo group. During the course of the study, there were two deaths reported, both in patients receiving placebo.

Full data from this study will be made available through scientific disclosure at an upcoming congress and peer-reviewed publication.

Pulmonary thromboendarterectomy (PTE) remains the preferred treatment for CTEPH. However, certain CTEPH patients are not operative candidates due to the nature of the disease, location of the thrombi or multiple co-morbid conditions. New medical treatment options are therefore needed for the effective management of this patient group.

In the US, Opsumit is indicated for the treatment of PAH, WHO Group I to delay disease progression. Disease progression included: death, initiation of intravenous (IV) or subcutaneous prostanoids, or clinical worsening of PAH (decreased 6-minute walk distance, worsened PAH symptoms and need for additional PAH treatment). Opsumit also reduced hospitalization for PAH.

Effectiveness was established in a long-term study in PAH patients with predominantly WHO FC II-III symptoms treated for an average of 2 years. Patients were treated with Opsumit monotherapy or in combination with phosphodiesterase-5 inhibitors or inhaled prostanoids. Patients had idiopathic and heritable PAH (57%), PAH caused by connective tissue disorders (31%), and PAH caused by congenital heart disease with repaired shunts (8%).

In Europe, Opsumit is indicated, as monotherapy or in combination, for the long-term treatment of PAH in adult patients of WHO Functional Class (FC) II to III. Efficacy has been shown in a PAH population including idiopathic and heritable PAH, PAH associated with connective tissue disorders, and PAH associated with corrected simple congenital heart disease.

Opsumit is very likely to cause major birth defects. It is contraindicated for use in pregnancy. In the US, Opsumit is distributed under a risk evaluation and mitigation strategy.