Proteins in the Bcl-2 family are central regulators of programmed cell death, and members that inhibit apoptosis, such as Bcl-2, are overexpressed in many cancers and contribute to tumor initiation, progression and resistance to therapy. Reductions in Bcl-2 increase sensitivity to anticancer drugs and enhance in vivo survival. [1] BCL2 family inhibition strategies currently explored in phases of clinical trials are essentially two: the use of antisense-based strategies to knockdown BCL2 expression or the use of synthetic BH3 mimetics. [2] These mimetics contains a novel class of BCL-2 inhibitors that have shown perspective results in several hematological malignancies, both as single agents and in combination with other anti-cancer therapy.

The acceptance that many cancers depend on antiapoptotic Bcl-2 proteins, and that Bcl-2 proteins interact through defined Bcl-2-homology (BH) domains prompted the development of drugs that mimic the action of the BH3 domain as they are able to restore apoptosis through the binding to one or more Bcl-2 family members. A true BH3 mimetic should mimic the BH3 domain of a proapoptotic Bcl2 family member, thereby inhibiting the antiapoptotic proteins by occupying their BH3-binding groove. One of the examples of such a potent inhibitor of Bcl-2 is ABT-737. It occupies the BH3-binding domain of these Bcl-2 proteins, and also induces apoptosis in a variety of cancer models. [3] 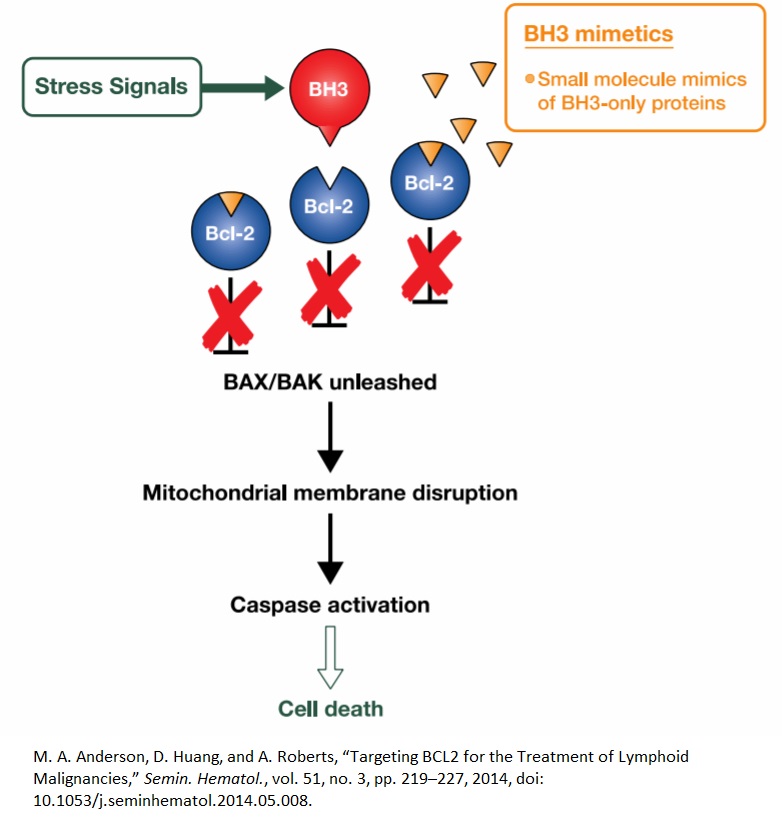