A late-breaking abstract being presented today during the 58th American Society of Hematology (ASH) Annual Meeting and Exposition in San Diego shows patients who experience graft-versus-host disease (GVHD) after stem cell transplantation that is not resolved by corticosteroid treatment may benefit from the use of ibrutinib, an anti-cancer drug approved by the U.S. Food and Drug Administration for treating certain blood cancers.

Sixty-seven percent of the trial’s 42 participants who experienced GVHD responded to ibrutinib, and 71 percent showed sustained improvements with ibrutinib over a five-month period, results that are encouraging for a subset of patients with limited treatment options beyond corticosteroids, according to the researchers. 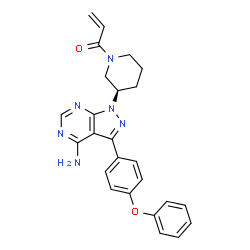 “This is a very high response rate,” said lead study author David Miklos, MD, of Stanford University. “These data are remarkable, and ibrutinib appears to exceed the therapeutic benefits of other agents. I think clinicians will find these data support the use of ibrutinib in patients with steroid refractory chronic GVHD (cGVHD), who currently suffer a range of symptoms that can be chronic and debilitating.”

Ibrutinib is designed to kill certain types of cancer cells by inhibiting the enzyme Bruton’s tyrosine kinase (BTK). The new trial and pre-clinical laboratory studies suggest the drug’s BTK inhibition activity and its inhibition of interleukin-2-inducible T-cell kinase (ITK) also make it a potent weapon against two types of immune cells—T-cells and B-cells—that are involved in GVHD.

The researchers enrolled 42 patients who had undergone allogeneic stem cell transplantation, a procedure in which blood-forming stem cells are taken from a donor and injected into a patient to help replace blood cells that have been lost due to cancer or cancer treatments. About 10,000 people receive allogeneic stem cell transplants in the United States each year. Of these, about 4,000 subsequently experience GVHD, in which the transplanted stem cells attack the patient’s body, causing symptoms such as rashes, mouth ulcers, dry eyes, gastrointestinal problems, shortness of breath, and decreased mobility in the joints and limbs.

Immune-suppressing corticosteroid medications are the standard treatment for GVHD, but they do not benefit all patients. The patients in this trial showed sustained GVHD symptoms despite corticosteroid treatment. Five months after initiating treatment with ibrutinib, 71 percent experienced meaningful clinical improvements as indicated by decreases in clinician and patient assessments of symptom severity, a reduction in the number of organs affected, and analysis of biomarkers associated with GVHD.

A substantial proportion of participants—45 percent—experienced serious adverse events such as pneumonia, septic shock, or severe fever. Additional adverse events included fatigue, diarrhea, muscle spasms, nausea, and bruising. The researchers said these findings are in line with what had been reported in prior studies and underscore the importance of actively monitoring and managing any adverse events when prescribing ibrutinib.

Overall, the researchers said ibrutinib represents a promising potential new therapy for GVHD. “By targeting allogeneic B-cells and TH2 lymphocytes, ibrutinib is targeting a pathogenic mechanism that we believe causes GVHD while leaving protective and anti-tumor cytotoxic T-cells intact,” said Miklos. “This is a targeted therapy that does not just bluntly suppress the immune system; it leaves patients better able to fight their cancer as well as viral infections.”

The researchers and their collaborators are currently recruiting participants for several additional trials to further investigate the use of ibrutinib in preventing or treating GVHD and compare it to other agents.

Provided by: American Society of Hematology