OSAKA, Japan and FLORHAM PARK, NJ, USA I October 26, 2016 I Shionogi & Co., Ltd. (hereafter “Shionogi”) presented the results of the first global surveillance study for its in-development investigational siderophore cephalosporin, cefiderocol (S-649266), at IDWeek™ 2016 in New Orleans, Louisiana. Cefiderocol showed potent activity against Gram-negative pathogens, including carbapenem-resistant strains of Pseudomonas aeruginosa and Acinetobacter baumannii as well as carbapenem-resistant Enterobacteriaceae. The results were presented using in vitro data from 8765 test strains of P. aeruginosa, A. baumannii, and Enterobacteriaceae isolated in 2014/2015 from patients in North America and across Europe.1 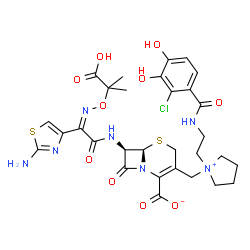 The study, conducted by International Health Management Associates, Inc, evaluated the in vitro activity of cefiderocol in comparison with various marketed Gram-negative treatments, including colistin and the newer agents ceftazidime/avibactam and ceftolozane/tazobactam. Key findings from the study included1:

Cefiderocol showed the lowest MIC50 and MIC90 values of all compounds tested. The growth of 99.6% of all isolates was inhibited at 4 µg/mL of cefiderocol (MIC of <4 µg/mL).

Cefiderocol was active against many of the Gram-negative pathogens that were not susceptible to other antibiotics (1290 isolates [14.7% of total studied] were non-susceptible to meropenem). Cefiderocol had MIC90 values of 1, 1, and 4 μg/mL against meropenem non-susceptible isolates of A. baumannii, P. aeruginosa, and Enterobacteriaceae, respectively; whereas the MIC90 values of both ceftazidime/avibactam and ceftolozane/tazobactam against these pathogens were >32 μg/mL .

The threat to public health of these MDR bacteria strains has reached a crisis point, according to the President’s Council of Advisors on Science and Technology.2 The magnitude of this threat has also been confirmed by the United Nations. At the recent United Nations General Assembly high-level meeting on antimicrobial resistance, the Director-General told the member states that antimicrobial resistance is a “fundamental threat” to global health and safety.

“There is an enormous need for new anti-infectives to battle the growing problem of drug-resistant bacteria, which has reached critical proportions,” said Dr Tsutae Den Nagata, Chief Medical Officer at Shionogi. “The study results presented at ID Week demonstrate that cefiderocol is highly active against the most problematic and serious Gram-negative carbapenem-resistant pathogens.”

Cefiderocol is a siderophore cephalosporin with a unique mechanism for penetrating efficiently into Gram-negative pathogens. Cefiderocol binds to free iron and is actively transported into bacterial cells through the outer membrane. 5 This Trojan horse strategy allows cefiderocol to enter the space in-between the bacterial cell walls and disrupt cell wall synthesis. 6 In addition, cefiderocol is stable against nearly all beta-lactamases, including both the serine and metallo-carbapenemases. 7

About the regulatory pathway of cefiderocol8,9

Cefiderocol has been designated by the U.S. Food and Drug Administration (FDA) as a Qualified Infectious Disease Product, which allows for priority review and provides eligibility for fast-track approval status. Registrational studies are ongoing in patients with complicated urinary tract infections and in patients with carbapenem-resistant pathogens at various infection sites. Information is available at www.clinicaltrials.gov under the identifiers NCT02321800 and NCT02714595, respectively.

Shionogi & Co., Ltd. is a major research-driven pharmaceutical company dedicated to bringing benefits to patients based on its corporate philosophy of “supplying the best possible medicine to protect the health and well-being of the patients we serve.” Shionogi’s research and development currently targets two therapeutic areas: infectious diseases and pain/CNS disorders. For over 50 years, Shionogi has developed and commercialized innovative oral and parenteral anti-infectives. In addition, Shionogi is engaged in new research areas, such as obesity/geriatric metabolic disease and oncology/immunology. Contributing to the health and QOL of patients around the world through development in these therapeutic areas is Shionogi’s primary goal. For more details, please visit www.shionogi.co.jp/en/. For more information on Shionogi Inc., the US-based subsidiary of Shionogi & Co., Ltd., headquartered in Florham Park, NJ, USA, please visit www.shionogi.com. For more information on Shionogi Ltd., the UK-based subsidiary of Shionogi & Co., Ltd., headquartered in London, England, please visit www.shionogi.eu.

Heads up, Biogen. After digging into Tecfidera patent arguments, analyst predicts a loss