In this relatively short review, examples of combinatorial library application will be given, with focus on the conventional ones. All illustrations come from the articles listed in the 'literature' section, figures most are from [1], 4 from [2].

This is a broad, but relatively shallow overview, so only a single example for each concept will be given. The paper [1], and, to a lesser extent, [2], provide a fairly in-depth exploration for those interested after finishing this short one.

CLs: as seen from the lighthouse's height

In the figure below, six major venues are represented: CL's ability to combine helps with the creation of interlocked structures, while the combinatorial nature directly leads to their uses in the fields with receptors and bioligands; with self-replication and transport demonstrating the power of CL's to be a part of the larger system. Out of these, as stated above, the ones on the left and amphiphiles and the more developed fields.

More traditional chemistry treats pure compounds as its focal point. Fortunately, nowadays it is more than possible to study and use more complex systems instead.  Part of that modern toolbox is dynamic combinatorial chemistry (DCC), which relies upon DCLs inherent interconnectivity.

Match made in heaven: zooming in on the ligand-receptor field

When it comes to DCLs, their most widespread use is finding ligand-receptor interactions: from catalyzing reactions to latching onto biomolecules.

A solid job: isolation of receptors

Solid-phase templates allow for separation and investigation of building blocks, which would otherwise be hard to take away from the mix. Additionally, they simplify the research by separating receptors with high affinity, which can be then follow with more narrow research on them specifically.

Of course, use of aforementioned concept calls for understanding the nature of the molecules involved, but it is very much worth it, as shown by a team that successfully made use of this idea and, by utilizing custom supports, managed to separate receptors from water and organic solubilizing agents.

They trapped quinine and quinidine on a styrene 1, divinylbenzene 2 and vinylbenzylchloride template, depicted in figure 13a.

A modestly sized dynamic combinatorial library made up of 3 (from figure 4a) facilitated the creation of receptors 4 and 5, for quinine and quinidine respectively. Templating and separation followed of 4 and 5, with a certain type of resin being more effective than others.

The same figure 4, 4b, depicts a scheme with a cationic template trapped on 6 and 7, anionic receptors were separated.  Analogous situation happened with 8 and 9, which increased the presence of 10 and 11, with no unneeded ion-exchange detected.

Too much of a good thing

Dynamic combinatorial chemistry was first designed for ligand-receptor interactions. Unfortunately, the link between affinity and increased presence is not 100% strong, so the presence of a suboptimal binder might be observed.

As an illustration of this point, consider a library from 1, 2, which includes in itself 4 and 5, which

have affinity for 3, with 5 being better than 4. Despite that, 4's presence was increased better when there was a lot of 3 in the solution. If there was not too much, 5 had the upper hand (figure 2).

A possible reason for that is the system's capability to make use of 3-4's energy, provided the abundance of 3, seeing as each one measure of it allows for more 3-4 copies than 3-5. This concept, that amplification and affinity correspond well only without too much template present is to be applied broadly.

3D cages are gaining popularity because of the ability to command delivery and other fascinating characteristics. Usually, they are generated either through kinetically controlled covalent or thermodynamically controlled non-covalent interactions. Unfortunately, both come with downsides: first are plagued with undesirable side products and the second ones with too much lability.

Luckily for this piece, dynamic combinatorial chemistry is of help here: DLs combine both of the previous approaches and use the strong points of each to cover the downsides: the result is controlled thermodynamically, but bonds are covalent.

A sequence of cages with the affinity to polyamine templates was made with blocks 2 and 34 (figure 3).  Without template three main product lines were observed: 2's trimers, tetramers, and a dimeric capsule from 34. To facilitate the generation of more massive cages, polyamines were used as templates. These larger  cages had up to eleven pieces connected by disulfide bonds.

A small note about catalysis: there exist cage mixes that bring reagents together and stabilized otherwise unstable middle structures. This is expected: catalysis and dynamic combinatorial chemistry share a field: molecular recognition.

As a known path to the recognition of D/RNA sequences with high affinity, SELEX, which essentially is guided evolution, and, because it is not the focus here, will not be explained much further, is part of the toolbox for utilizing these sequences in the medical field. However, it can not do all the work by itself – having fluorescent tags joining it is oftentimes a necessity, but they have a habit of decreasing the affinity of the sequence.

A hybrid approach, SELEX-DCL (with dynamic combinatorial libraries), facilitates a more straightforward selection of sequence-conjugate pairings, making the method less resource-hungry. Creation of  combinations of nucleotides with an amine either in the company of micromolecules with aldehyde radicals. On top of that, TAR region of human immunodeficiency virus was included.

After that the target with its high affinity library blocks was isolated and binders were removed, in parallel with imine hydrolysis to allow for amplification of desired sequences with polymerase chain reaction. They then were amplified-mutated a number of times, with choosing the best ones as the goal. After  that, these sequences were added to the target with some other agents to create a stable combination, demonstrating the power of the hybrid approach. 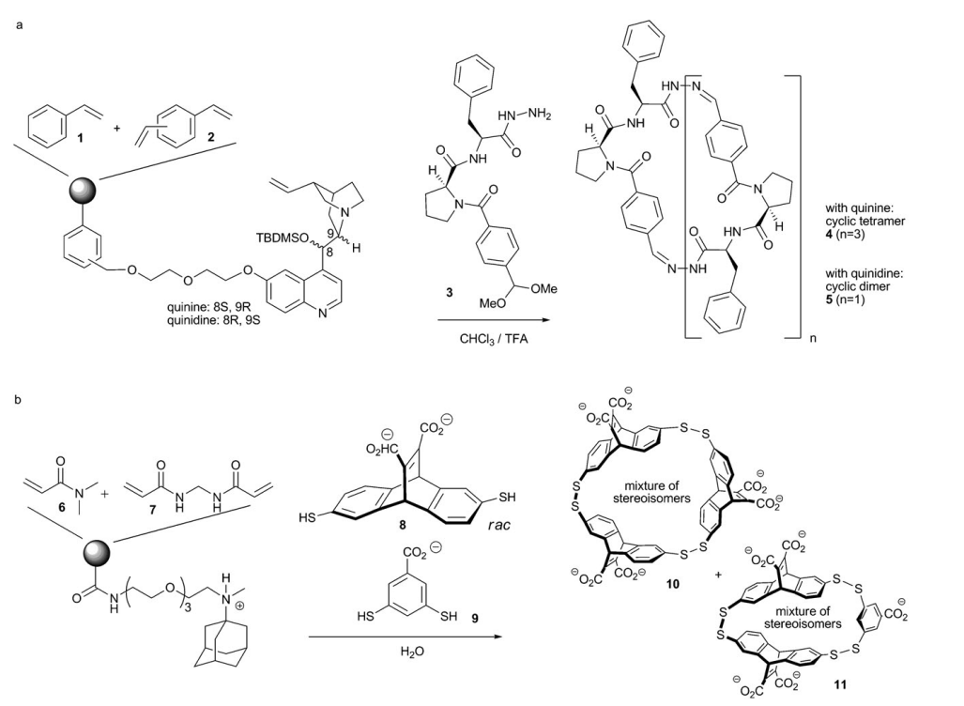 A dynamic combinatorial library consisting of metal-dye complexes has an absorbance profile. The incorporation of some new molecule, which changes that profile in ways that describe that molecule. Different molecules will change the original profile in different ways (figure 5).

This allowed for discerning between hormones, dipepetides (Phe-Ala. Ala-Phe, D-Phe-Ala, for example), nucleotides of different composition and molarity. Furthermore, if kinetics are also taken into account, one can see the timeline of addition of these compounds.

Because these 'eyes' see the overall profile, there is no need to know much about concrete combinations in the mix. Even more, dynamic combinatorial libraries made exclusively from standard dyes are easy to adapt. 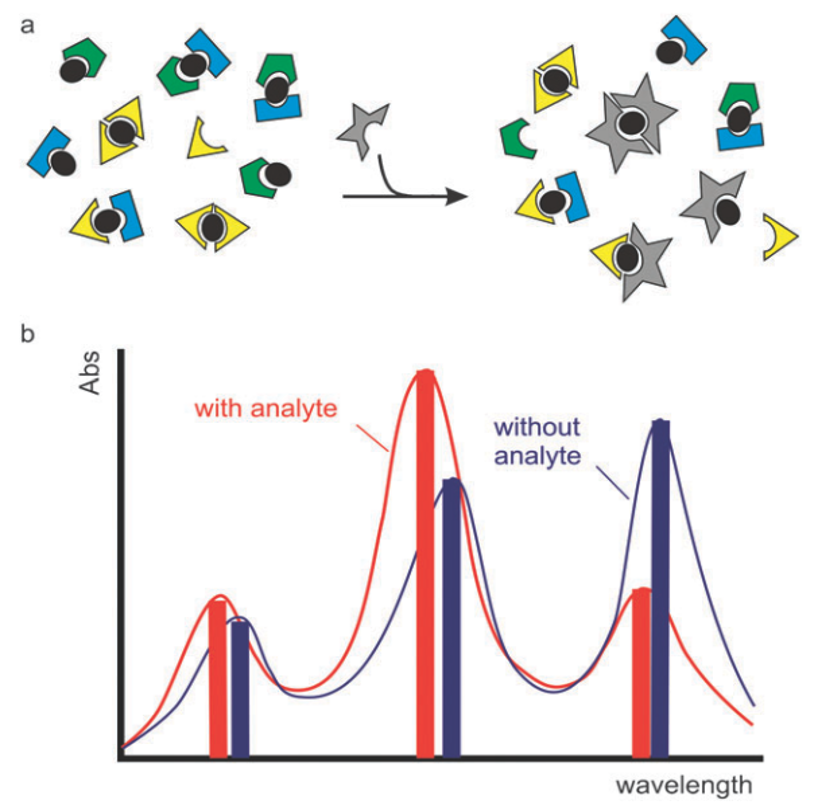 Figure 5: (a) Addition of a new compound alters the DCL's composition (b) This results in a different absorbance profile, which can be examined further later.

Combinatorial libraries, dynamic or otherwise, are quite useful in a wide range of application, especially ligand-receptor recognition, for which they were originally envisioned. Combined with the advances of the modern day, such as cages and 'chemical eyes', they become a must-have. ChemDiv offers a selection of quality combinatorial libraries at a fair price. A complete response to the challenge of COVID-19 requires diagnosis, prevention, and treatment strategies. Until recently, the treatment ... Focused library
Computer-based methods of focused library creation. Today, in silico drug design (CADD) is used by the vast majority of pharmaceutical leaders, including ChemDiv. Here we will give three examples ...