GPCR and their allosteric regulation

G-protein coupled receptors or GPCR are big membrane proteins receiving signals from various molecules and stimuli. Nowadays, this class of proteins is one of the most important as a group of possible drug targets – several reports show that up to 40% of all modern drugs’ targets are GPCR [1].

Because of GPCR, people can see, smell, and feel emotions and pain. There is nearly a thousand of genes responsible for GPCR, but despite this, these proteins have much in common. All of them sit in the cell membrane penetrating it 7 times. Most of GPCR, according to the group name, connect to G-proteins (responsible for intracellular signaling) after activation. 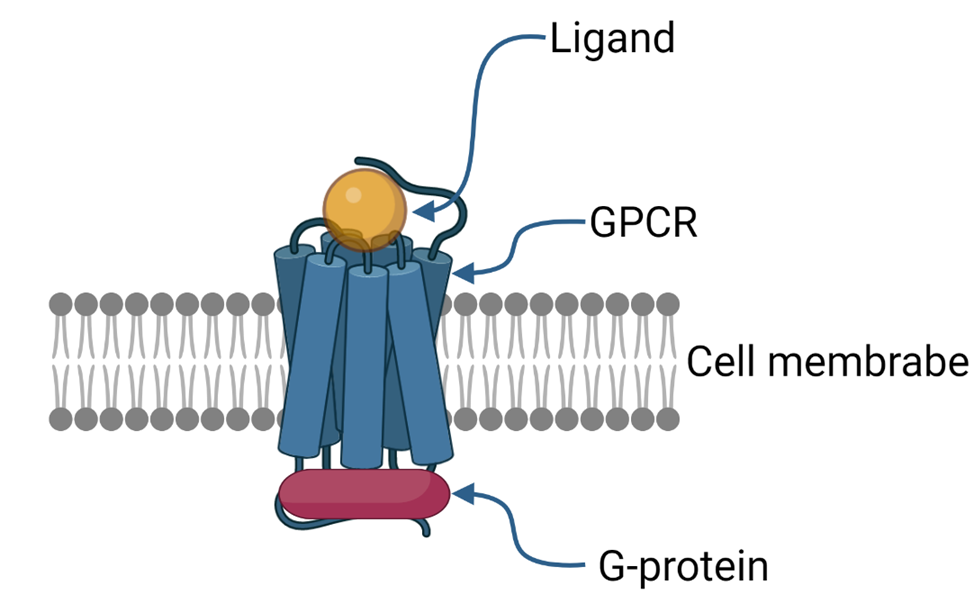 GPCR proteins do not only play a significant role in a normal physiology and biochemistry, but they also open up new possibilities in the treatment of many diseases. That is why it’s important to study their regulation mechanisms. There are two main classes of GPCR regulators. Let’s look at each of them in detail.

First type of GPCR regulation lies in interaction between the ligand and the orthosteric site, the main site through which the receptor is activated. Orthosteric ligands fall into two categories: agonists, which stimulate receptor activity, or antagonists, which block it. Orthosteric GPCR ligands can be either natural (and perform their physiological functions in the body) or artificial (synthetic), usually having structure similar to their natural analogues.

In some cases, orthosteric agonists and antagonists don’t solve problems relevant for modern medicine. The reason is that most GPCR types in the organism have several subtypes working in different cells. Many drugs that are supposed to affect one specific type of cells are actually affecting many subtypes because of highly conservative orthosteric site within one type of GPCR proteins.

Low selectivity of medicinal products within one type of receptors may cause serious side effects. That’s why researchers tried to find another way of regulating GPCR activity – and they found it! Members of this group of receptors, as many other proteins, have alternative binding sites on the surface called allosteric sites. Regulation through any of those sites gives an opportunity to activate or inhibit receptor bypassing the main orthosteric site.

Unlike orthosteric regulators, allosteric regulators differ from one receptor subtype to another. As a result, molecules binding to allosteric sites of GPCR are much more specific within the type compared to molecules binding orthosteric sites. Such ligands can be considered as potential highly specific drugs targeting G-protein coupled receptors.

Let’s turn to examples of GPCR allosteric regulators in modern medicine for further study of the topic.

Chemokine receptors are G-protein coupled receptors with chemokines being natural ligands for them. The main function of such proteins is to provide cell migration [2]. They participate in many biological processes: the functioning of the immune system, the development of allergic reactions, etc. Moreover, some proteins in this group are involved in HIV development, so it’s important to know some ways to lower its activity. At the same time, one chemokine receptor is able to interact with several chemokines – and that’s the reason for search of allosteric regulators for this class of GPCR. Examples of such regulators for chemokine receptors are Maraviroc and Plerixafor.

This class of proteins is also a part of GPCR superfamily. Its two subtypes are CB1 and CB2. CB1 receptors are expressed in central nervous system (CNS), spinal cord and numerous other types of cell, while CB2 is primarily involved in the work of the immune system [3]. CB1 antagonists are used for weight loss and smoking cessation, while CB2 receptors are believed to have a therapeutic role in neurodegenerative disorders treatment. Orthosteric sites of CB1 and CB2 proteins are highly similar, therefore allosteric regulators are used to specifically target CB1 or CB2 subtypes.

Opioid receptors are a type of GPCR distributed throughout CNS. The major subtypes of opioid receptors (OR) are DOR (delta), KOR (kappa), MOR (mu), NOR (nociception) and ZOR (zeta) [4]. They take part in various biological processes and have different therapeutic roles. Most of known opioid antagonists (such as naloxone) are orthosteric, affecting several different opioid receptor subtypes. However, there are allosteric regulators specific for each of subtypes. They are mostly used for research purposes.

This group of GPCR proteins is involved in regulation of the endocrine function for many endocrine glands. Receptors from the group has their own allosteric sites depending on the subtype of the protein. The need of allosteric regulators in this case comes from side effects occurring when orthosteric ligands are used.

There are some other GPCR types (serotonin receptors, dopamine receptors, glutamate receptors, etc.) in which allosteric regulators are sought successfully.

According to current research, there are several advantages of allosteric GPCR regulators:

1) High selectivity within one class of proteins;

2) A possibility of joint action of allosteric regulators and the orthosteric ligand for GPCR; DMSO
Dimethyl sulfoxide (DMSO) is an organic chemical polar compound in a liquid state under normal conditions. It is the aprotic solvent or the solvent which, when decomposed in solution, does not...