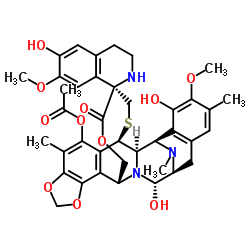 (HealthDay)—The chemotherapy drug Yondelis (trabectedin) has been approved by the U.S. Food and Drug Administration to treat certain soft-tissue sarcomas (STS) that have spread or can’t be treated by surgery.

STS can form anywhere, but most often affects soft tissues in the head, neck, arms, legs, trunk and abdomen, the agency said Friday in a news release. Some 12,000 cases were diagnosed in the United States last year.

Yondelis is approved for people with two forms of STS—liposarcoma or leiomyosarcoma—who have had previous treatment with chemotherapy that contained the drug anthracycline, the FDA said.

Yondelis was evaluated in clinical studies involving 518 people. People who took Yondelis had cancer progression stopped for an average of 4.2 months, compared to an average of 1.5 months among those who took another anti-cancer drug, the agency said.

The most common side effects of Yondelis include nausea, fatigue, vomiting, diarrhea, constipation, loss of appetite, shortness of breath, headache and tissue swelling.

The drug’s label warns of the possibility of more serious side effects, including life-threatening blood infections, muscle breakdown, liver damage, leakage near the injection site and heart failure.

It also warns women of childbearing age of potential harm to a developing fetus, and against breastfeeding while on the drug.

Yondelis is marketed by Janssen Products, based in Raritan, N.J.