Three scientists shared this year’s Nobel Prize in Chemistry for tapping the power of evolutionary biology to design molecules with a range of practical uses.

Those include new drugs, more efficient and less toxic reactions in the manufacture of chemicals and plant-derived fuels to replace oil, gas and coal extracted from the ground. 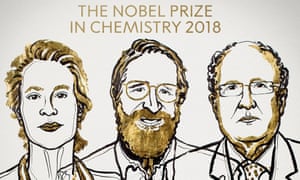 Half of the prize and the accompanying $1 million went to Frances H. Arnold, a professor of chemical engineering at the California Institute of Technology. She is only the fifth woman to win a chemistry Nobel and the first since 2009.

The other half of the prize is shared by George P. Smith, an emeritus professor of biological sciences at the University of Missouri, and Gregory P. Winter, a biochemist at the M.R.C. Laboratory of Molecular Biology in England.

Bayer has indicated its willingness to pay for one share of Monsanto $127,5