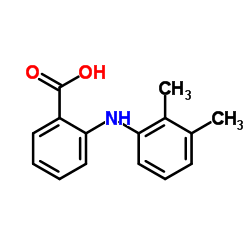 Mefenamic acid is a non-steroidal anti-inflammatory drug, commonly used to relieve period pain. Thanks to research being conducted at The University of Manchester, however, it may eventually have another use – the treatment of Alzheimer’s disease. In lab trials, it has reversed memory loss and brain inflammation in transgenic mice.

Led by Dr. David Brough, the Manchester team worked with mice that were genetically altered to exhibit Alzheimer’s-like symptoms. At the time of the experiments, the mice had begun to develop memory problems.

All 20 animals had mini-pumps implanted under their skin, for a period of one month. Those pumps delivered measured doses of mefenamic acid to ten of the mice, while the other ten received a placebo. At the end of the month, memory loss in mice receiving the acid had completely disappeared, while the placebo group remained unchanged.

“There is experimental evidence now to strongly suggest that inflammation in the brain makes Alzheimer’s disease worse,” says Brough. “Our research shows for the first time that mefenamic acid, a simple non-steroidal anti-inflammatory drug, can target an important inflammatory pathway called the NLRP3 inflammasome, which damages brain cells.”

That said, what works on mice won’t necessarily work on us, so human trials are now being planned. Should those also prove promising, it may not take long before widespread treatments subsequently begin.

“Because this drug is already available and the toxicity and pharmacokinetics of the drug is known, the time for it to reach patients should, in theory, be shorter than if we were developing completely new drugs,” says Brough.

A paper on the research was recently published in the journal Nature Communications.

Source: The University of Manchester