A breast cancer drug that Pfizer Inc acquired with its $14 billion purchase of Medivation showed promising anti-tumor activity following prior treatments and a modest ability to hold the disease in check, according to data from a mid-stage study released on Wednesday.

The drug, talazoparib, belongs to a class of medicines called PARP inhibitors which may induce tumor cell death. PARP inhibitors have shown promise in ovarian and breast cancers. 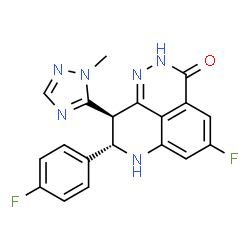 The Phase II study tested the drug in women with advanced breast cancer who had hereditary mutations of the BRCA1/2 genes. That is the type of mutation that led actress Angelina Jolie to have preventive breast removal surgery due to her increased risk of cancer.

Talazoparib led to significant tumor shrinkage in 21 percent of the 48 patients in the study’s first group, whose disease had progressed following platinum-based chemotherapy treatment.

Significant tumor shrinkage, or overall response rate, was seen in 37 percent of a second group of 35 patients who had received at least three prior regimens of non-platinum chemotherapy.

Median progression-free survival, or the time until disease worsening after talazoparib treatment, was 4 months in the first group and 5.6 months in the second group. Overall survival data was not yet available.

The data, included in a brief summary of the study to be presented next month at the American Society of Clinical Oncology meeting in Chicago, may not represent the final results.

BRCA mutations account for more than 50 percent of hereditary breast cancers, and up to 65 percent of those who inherit the mutations will develop breast cancer, often much younger than is typical for the disease.

While gaining the blockbuster prostate cancer drug Xtandi was the prime reason for the Medivation acquisition last year, Pfizer has extensive plans for talazoparib.

It has begun enrolling patients for a larger Phase III breast cancer study and sees potential for the drug against several other types of cancer, including ovarian, gastric and small cell lung cancer, in combination with other treatments such as immunotherapies.

Drug giant Pfizer to split into three units, including a new hospital business