New York (May 31, 2017) -- AbbVie Inc. has the best reputation among major pharmaceutical companies, while Pfizer Inc. is the least admired for the second-straight year, according to a report issued Wednesday.

The annual report from the Boston-based Reputation Institute collected nearly 17,000 ratings from 6,500 consumers familiar with Big Pharma and ranked 17 drugmakers on numerous attributes, including product quality and corporate citizenship. 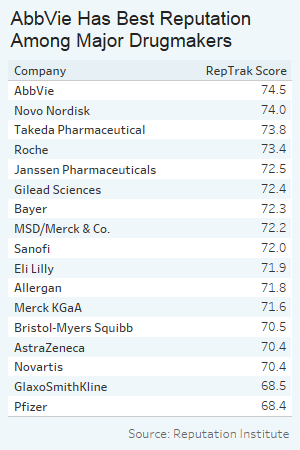 AbbVie took home the top spot, followed closely in a top tier of finishers that included Novo Nordisk AS, Takeda Pharmaceutical Co. Ltd. and Roche AG. Last year's champ, Bayer AG, finished in seventh place. Pfizer brought up the rear, as it did in 2016, and was joined in the lowest tier of finishers by GlaxoSmithKline PLC.In a statement on Wednesday, AbbVie credited outreach efforts that it deployed after being spun off in 2012 from Abbott Laboratories.“Since the company’s inception less than five years ago, we have worked to raise a better understanding of AbbVie among our key stakeholders,” said Laura Schumacher, general counsel at AbbVie. “We are pleased that these efforts have resonated with our global audience and driven greater understanding of who we are and what we stand for as a company.”Although Pfizer finished last, its score was actually only about six percentage points lower than AbbVie’s. The report includes most of the major brand-name drugmakers, although there are a few notable exceptions, including Johnson & Johnson, which the Reputation Institute classifies as a consumer products company.The report generally found an uptick in public admiration for drugmakers despite negative headlines in recent years about steep price increases for many prescription medicines. But the report’s author, Kasper Ulf Nielsen, cautioned that the industry ratings were derived from ratings of individual drugmakers, potentially skewing them.“People tend to give the individual companies a higher rating than if you just asked about the industry,” Nielsen told reporters.Nonetheless, Nielsen suggested that the findings indicate that Big Pharma’s standing with consumers isn’t as shaky as commonly assumed.“There is a big difference between the media coverage and people’s perception,” Nielson said.At the same time, drugmakers received their lowest marks in areas that may be unsurprising, such as ethics and transparency, while receiving their highest marks for being profitable and innovative.Wednesday’s report cited several benefits of a strong reputation, including a greater likelihood of recruiting top talent, attracting investors and selling products.The report surveyed consumers in Brazil, Canada, France, Italy, Germany, Spain, the U.K. and the U.S. Americans had the most favorable views of drugmakers while the French had the least favorable views, although their overall perspective differed by only four percentage points.