The British drugmaker hopes the data from the trial will widen the use of Lynparza and help it keep up with competitors racing to broaden the use of PARP medicines. 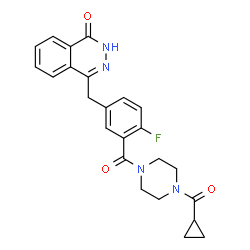 Lynparza and other PARP inhibitors block enzymes involved in repairing damaged DNA, thereby helping to kill cancer cells. They are also being studied against other cancers, including breast and pancreatic tumors.

Women with recurrent ovarian cancer and defective BRCA genes lived a median 19.1 months without their disease worsening when given Lynparza, against 5.5 months for those on placebo, based on disease progression assessments carried out by investigators.

When disease progression was measured by central, blinded review, however, the figure rose to 30.2 months, according to data presented at the Society of Gynecologic Oncology annual meeting on Tuesday.

AstraZeneca's drug became the first of the new class to reach the market when it won U.S. approval at the end of 2014, but it is currently only recommended for fourth-line use.

The latest clinical trial is designed to move it up to second-line maintenance therapy, where it would be used for longer periods, significantly increasing its market.

AstraZeneca has developed a new tablet dose reducing the pill intake for patients from 16 capsules to four tablets a day.

Lynparza, which had been abandoned at one stage by AstraZeneca but was revived by CEO Pascal Soriot when he took over in 2012, is projected by have annual sales of $1.03 billion by 2022, according to Thomson Reuters data. It sold $218 million in 2016.

The strong Lynparza results wiped 13 percent off shares in Tesaro, whose competing drug niraparib is awaiting a regulatory green light and which has been viewed by many investors as the best of the PARP products.

AstraZeneca's shares climbed 1 percent in New York. The smaller market reaction reflects the larger size of the British drugmaker and the fact that its investors are awaiting other clinical data.

Faced with the need to reinvent its drug portfolio following a raft of patent expiries, AstraZeneca’s turnaround will hinge crucially on the outcome of a two-drug immunotherapy trial in previously untreated lung-cancer patients.