A substance found in the livers of dogfish sharks could help treat Parkinson’s disease, scientists at Cambridge University believe.

Early research suggests the compound, called squalamine, not only prevents the formation of toxic plaques called Lewy Bodies which accumulate in the brain of sufferers, but also stops them being as damaging once they’ve already formed.The compound has already been used in clinical trials for cancer and eye conditions in America, and a trial in Parkinson's disease patients is now being planned by one of the researchers involved in the study.Studies on human cells and worms suggests that it could be a valuable treatment for the disease."To our surprise, we found evidence that squalamine not only slows down the formation of the toxins associated with Parkinson's Disease, but also makes them less toxic altogether," said Professor Christopher Dobson, of St John's College at Cambridge University."If further tests prove to be successful, it is possible that a drug treating at least some of the symptoms of Parkinson's Disease could be developed from squalamine."We might then be able to improve on that incrementally, by searching for better molecules that augment its effects."Squalamine is a anti-microbial compound which was discovered in the 1990s in the liver tissue of dogfish sharks by scientists who were looking for an explanation as to why the fish were so good at fighting off infection. Scientists can now create the compound in a synthetic form in the lab.To date, it has undergone extensive trials to fight infections and as an anti-cancer therapy.It is not yet clear whether squalamine can reach the specific regions of the brain where the main molecular processes determining Parkinson's disease take place, or what form any resulting drug might take. But it could also help patients with dementia caused by Lewy Bodies."In many ways squalamine gives us a lead rather than a definitive treatment," added Prof Dobson."Parkinson's disease has many symptoms and we hope that either this compound, or a derivative of it with a similar mechanism of action, could alleviate at least some of them."One of the most exciting prospects is that, subject to further tests, we might be able to use it to make improvements to patients' lives, while also studying other compounds with the aim of developing a more powerful treatment in the future."In the new study, researchers found squalamine inhibits the early formation of toxic aggregates of the protein alpha-synuclein - a process thought to start a chain reaction of molecular events eventually leading to Parkinson's Disease - and can suppress the toxicity of these poisonous particles. 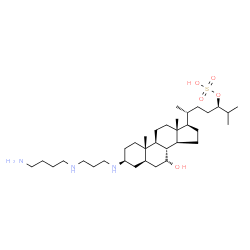 Claire Bale, Head of Research Communications at Parkinson’s UK, said: “Large, sticky clumps of alpha-synuclein, called Lewy bodies, are a classic feature of Parkinson’s, and are found inside the brains cells that are gradually lost throughout the course of the condition.

“Preventing the formation of Lewy bodies is one of the most hopeful routes to new treatments that can slow, stop or reverse the condition,  and makes the discovery that squalamine may be able to do this especially promising.“However, while this research is an important step in the right direction, there is much to learn about how squalamine works in the human body before we will know if it has any benefits for people living with Parkinson’s.”The findings are published in Proceedings Of The National Academy Of Sciences.