Nektar Therapeutics said its experimental opioid, designed to achieve pain relief without the euphoria that can lead to abuse and addiction, succeeded in a key late-stage study.

The company's stock jumped about 19 percent to $19.50 in premarket trading on Monday.

U.S. regulators and lawmakers are taking steps to control the supply of opioids as the country remains engulfed in an epidemic of abuse, overdose and addiction.

This is partly due to the unrestricted prescription of narcotic painkillers, drug diversion, and the paucity of access to substance-abuse treatment programs. Everyday, 91 Americans die of opioid overdose, the U.S. Centers for Disease Control and Prevention (CDC) estimates.

Nektar's drug, which by design reaches the brain slower than existing opioids to deter abuse, outperformed a placebo in over 600 patients with chronic lower back pain. [nPn3zWgQsa]

Nektar's NKTR-181 is as effective as existing long-acting opioids and was created drawing on science that suggests the euphoric effect of opioids is influenced by their rate of entry into the brain, Chief Scientific Officer Dr. Stephen Doberstein said. 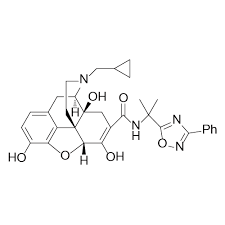 It is the same concept that underlies nicotine and cocaine addiction, he said. "The faster the drug enters the brain, across the blood-brain barrier, the more dopamine is released."

NKTR-181's characteristics are independent of the formulation, Doberstein added. "It doesn't really matter if you snort it or inject it."

A separate "human abuse liability" study showed the drug is "virtually indistiguishable" from placebo in subjects who are well versed in understanding what an opioid feels like from an abusers standpoint, he added.

Opioids are considered the gold standard in treating chronic pain that persists despite other forms of therapy, but the rising wave of abuse is taking a toll on the healthcare system.

Last week, an independent panel to the FDA concluded the benefits of a long-acting opioid painkiller, Opana ER, sold by Endo International Plc no longer outweighed its risks.

The panel was asked to address the high abuse rate of the this variation of oxymorphine — and other related products. [nL3N1GR50U]

Under the Controlled Substance Act, which organizes drugs into groups based on risk of abuse or harm, most opioids come under a schedule II category. But Nektar hopes NKTR-181 is safe enough to secure a schedule III, or lower, classification.

The company plans to go to the U.S. Food and Drug Administration to discuss its next steps and is looking for a partner to sell the drug, if and when approved, Doberstein said.