Scientists may have developed the first targeted, oral, tumor-type agnostic therapy - a cancer medicine that works comparably well across many kinds of cancer, regardless of patient age. In clinical trials of adults and children with 17 different types of advanced cancer, larotrectinib treatment resulted in responses in 76% of patients. Response to larotrectinib has been durable, with 79% of responses ongoing 12 months after starting treatment. 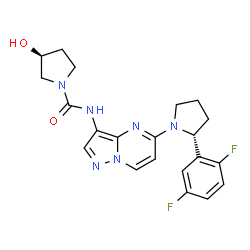 The study will be featured in a press briefing today and presented at the 2017 American Society of Clinical Oncology (ASCO) Annual Meeting.

Larotrectinib is a selective inhibitor of tropomyosin receptor kinase (TRK) fusion proteins, which are a product of a genetic abnormality when a TRK gene in a cancer cell fuses with one of many other genes. It is estimated that this abnormality occurs in about 0.5% - 1% of many common cancers, but in greater than 90% of certain rare cancers, such as salivary gland cancer, a form of juvenile breast cancer, and infantile fibrosarcoma.

"TRK fusions are rare, but occur in many different cancer types. In fact, at this point it is hard to find a cancer type where TRK fusions have not been reported," said lead study author David Hyman, MD, Chief of Early Drug Development at Memorial Sloan Kettering Cancer Center in New York. "These findings embody the original promise of precision oncology: treating a patient based on the type of mutation, regardless of where the cancer originated. We believe that the dramatic response of tumors with TRK fusions to larotrectinib supports widespread genetic testing in patients with advanced cancer to see if they have this abnormality."

Researchers analyzed data from 55 patients with TRK fusions enrolled in three ongoing phase I and phase II clinical trials. All patients (12 children and 43 adults) had locally advanced or metastatic cancer, including colon, lung, pancreatic, thyroid, salivary, and gastrointestinal cancers, as well as melanoma and sarcoma.

"This dataset, subject to independent central radiology review, will be submitted to FDA for larotrectinib's regulatory approval. If approved, larotrectinib could become the first therapy of any kind to be developed and approved simultaneously in adults and children, and the first targeted therapy to be indicated for a molecular definition of cancer that spans all traditionally-defined types of tumors," said Dr. Hyman.

In the first 50 patients with 17 different cancer types who have been on the study long enough to have at least two scans, 38 (76%) of these patients had a response. Of those, three patients with pediatric sarcomas previously not amenable to surgery went on to receive potentially curable surgery after larotrectinib shrank the tumors.

The most common side effects were fatigue and mild dizziness, which was expected as the normal TRK protein has a role in controlling balance. No patients needed to stop treatment due to side effects.

"Because larotrectinib was designed to target only TRK, it has been very well tolerated and does not cause many of the side effects associated with chemotherapy and multi-targeted therapy," said Dr. Hyman.

TRK fusions were first discovered in colon cancer in 1982, but only recent technological advances, particularly next-generation sequencing (NGS), have enabled systematic detection of this abnormality. To date, scientists have found more than 50 different partner genes that fuse with one of three TRK genes (NTRK 1, 2, and 3).

Although there are other experimental treatments that block TRK along with other proteins, larotrectinib is the first to selectively block TRK. This characteristic improves potency of the drug, while lowering side effects.

The FDA granted larotrectinib a breakthrough therapy designation in 2016 for the treatment of pediatric and adult TRK fusion-positive unresectable or metastatic solid tumors that had worsened despite systemic therapy or that have no acceptable alternative treatments. The designation serves to expedite the development and review of promising new drugs for treating serious or life-threatening illnesses.

The researchers have identified what they believe to be the primary means by which tumors may grow resistant to larotrectinib, and they are studying another TRK-targeted therapy, LOXO-195, for the treatment of patients with cancer that regrows after initially responding to larotrectinib.