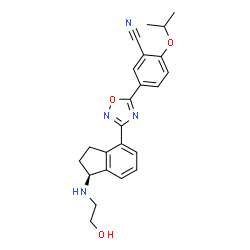 Ozanimod is being developed by blood cancers specialist Celgene (Nasdaq; CELG) and, if approved, it would be the company’s first foray into the highly competitive multiple sclerosis market. The US biotech major gained rights to ozanimod through its acquisition of Receptos for $7.2 billion in 2015. The drug is being developed in other indications, including ulcerative colitis and inflammatory bowel disease. Celgene’s shares edged up 1.6% to $120.56 by late morning trading.

Scott Smith, president of Celgene Inflammation and Immunology, commented: “We look forward to data from the confirmatory Phase III RADIANCE trial in the second quarter as we advance toward planned regulatory submissions by year-end.”

Top-line data show that both the ozanimod 1mg and 0.5mg treatment arms demonstrated statistically-significant and clinically-meaningful improvements compared to Avonex for the primary endpoint of ARR and the measured secondary endpoints of the number of gadolinium-enhancing MRI lesions and the number of new or enlarging T2 MRI lesions at month 12. As agreed to in the Special Protocol Assessment (SPA) with the U.S. Food and Drug Administration, a pre-specified analysis on the time to onset of disability progression will be conducted using pooled results from both the SUNBEAM and RADIANCE phase III trials.

“The safety and efficacy results from SUNBEAM are consistent with the long-term results from the phase II trial (RADIANCE). These data add to the growing body of evidence supporting the use of ozanimod as a disease modifying therapy for relapsing forms of multiple sclerosis,” said Bruce Cree, Associate Professor of Neurology, Multiple Sclerosis Center, Department of Neurology, University of California San Francisco. “We look forward to the continued study of ozanimod as well as presentation of the full results of the Phase III trial at an upcoming international scientific meeting.”

Celgene also expects to release data this year from its Phase II trial STEPSTONE, which is evaluating ozanimod in Crohn’s disease. The company has projected that it will complete enrollment of human subjects in its Phase III TRUE NORTH trial, which will explore ozanimod’s potential as an ulcerative colitis therapy. Celgene is confident that ozanimod will prove to be a strong asset, both in inflammatory bowel syndrome (or IBD) and multiple sclerosis.