AstraZeneca announced that the US Food and Drug Administration (FDA) has granted full approval for Tagrisso (osimertinib) 80mg once-daily tablets, for the treatment of patients with metastatic epidermal growth factor receptor (EGFR) T790M mutation-positive non-small cell lung cancer (NSCLC), as detected by an FDA-approved test, whose disease has progressed on or after an EGFR tyrosine kinase inhibitor (TKI) therapy. Tagrisso is the first and only approved medicine in the US indicated for NSCLC patients who have tested positive for the EGFR T790M mutation, and efficacy data suggest it may be a new standard of care for these patients. 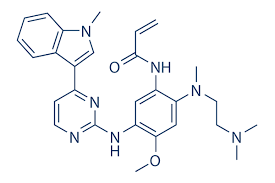 Sean Bohen, Executive Vice President, Global Medicines Development and Chief Medical Officer at AstraZeneca, said: “By following the science, we aim to turn lung cancer into a chronic, manageable disease for patients and this milestone brings us one step closer to that ambition. The FDA’s full approval reinforces the potential of Tagrisso to become the standard of care for patients with metastatic EGFR T790M mutation-positive non-small cell lung cancer whose disease has progressed on or after first-generation EGFR-TKI therapy.”The full approval in the US is based on data from the randomised, Phase III AURA3 trial, in which Tagrisso significantly improved progression-free survival (PFS) versus platinum-based doublet chemotherapy, providing 10.1 months of median PFS compared to 4.4 months from chemotherapy (hazard ratio 0.30; 70% risk reduction; 95% Confidence Interval [CI]: 0.23; 0.41; P<0.001). The results of this trial were recently presented at the 17th World Conference on Lung Cancer (WCLC) in Vienna, Austria, and published in The New England Journal of Medicine.In AURA3 the most common (>20%) adverse reactions observed in Tagrisso-treated patients were diarrhea (41%), rash (34%), dry skin (23%), nail toxicity (22%), and fatigue (22%). Dose reductions occurred in 2.9% of patients treated with Tagrisso. The most frequent adverse reactions that led to dose reductions or interruptions were prolongation of the QT interval as assessed by ECG (1.8%), neutropenia (1.1%), and diarrhea (1.1%). Serious adverse reactions were reported in 18% of patients treated with Tagrisso and 26% of patients in the chemotherapy group. No single serious adverse reaction was reported in 2% or more patients treated with Tagrisso.Tagrisso was granted Fast Track, Breakthrough Therapy and Priority Review designations by the US FDA, and received Accelerated Approval for this indication in 2015 based on tumour response rate and duration of response.