SOUTH SAN FRANCISCO, Calif., June 23, 2017 (GLOBE NEWSWIRE) -- Portola Pharmaceuticals Inc.® (Nasdaq:PTLA) today announced the U.S. Food and Drug Administration (FDA) has approved Bevyxxa (betrixaban), the first and only anticoagulant for hospital and extended duration prophylaxis (35 to 42 days) of venous thromboembolism (VTE) in adult patients hospitalized for an acute medical illness who are at risk for thromboembolic complications due to moderate or severe restricted mobility and other risk factors for VTE. 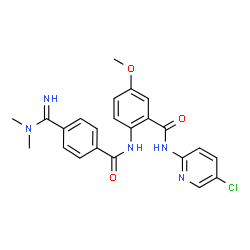 Bevyxxa, an oral, once-daily Factor Xa inhibitor, was granted a Fast Track designation and approved by the FDA under Priority Review, which is a status given to drugs that may offer significant improvements in treatment or provide a treatment where no adequate therapy exists. Bevyxxa has been approved based on data from Portola's pivotal Phase 3 APEX Study, which enrolled 7,513 patients at more than 450 clinical sites worldwide.

"Bevyxxa represents a major advance for the field of thrombosis. It is the first therapy to demonstrate a reduction in the incidence of VTE in these high-risk patients without a significant increase in major bleeding,” said C. Michael Gibson, M.D., APEX Executive Committee Member and Steering Committee Chairman, professor, Harvard Medical School and chairman of the PERFUSE Study Group. “With this approval, we are finally able to help protect these patients from this often fatal, yet preventable condition.”

“Our goal as a company is to bring to market important medicines for the benefit of patients,” said Bill Lis, Chief Executive Officer of Portola. “Today’s approval is the ultimate milestone for Portola. We are grateful to the patients who participated in our trials, the FDA, our academic collaborators and investigators, and, importantly, our dedicated employees who have worked tirelessly to achieve this goal.”

Acutely ill medical patients are those hospitalized for serious medical conditions, including heart failure, stroke, infection and pulmonary disease. Because of their underlying disorder and immobilization, they are at increased risk of developing deep vein thrombosis (DVT) and pulmonary embolism (PE) blood clots.

The APEX study evaluated oral betrixaban for 35 to 42 days compared with injectable enoxaparin for 6 to 14 days followed by placebo in assessing the prevention of VTE in high-risk acutely ill medical patients. As detailed in the prescribing information, Bevyxxa efficacy was measured in the modified Intent-to-Treat (mITT) analysis, which includes 7,441 patients assessed by a composite outcome score comprising either the occurrence of asymptomatic proximal DVT or symptomatic DVT, non-fatal PE or VTE-related death. Bevyxxa reduced the incidence of DVT and PE blood clots compared with those taking enoxaparin plus placebo (4.4 percent vs. 6.0 percent; relative risk 0.75, 95 percent CI: 0.61, 0.91) with no significant increase in major bleeding (0.67 percent vs. 0.57 percent). The most frequent reason for treatment discontinuation was bleeding, with an incidence rate for all bleeding episodes of 2.4 percent and 1.2 percent for betrixaban and enoxaparin, respectively.

Results from the APEX Study have been peer-reviewed and published in The New England Journal of Medicine, Circulation and the American Heart Journal.1

“For the first time, physicians will have a therapy to help reduce VTE in acutely ill medical patients during their transition from hospital to home, which may ultimately help reduce morbidity,” said Alexander (Ander) T. Cohen, M.B.B.S., M.Sc., M.D., FRACP, APEX Co-Principal Investigator and Co-Chairman of the APEX Executive Committee and Consultant Physician at Guy’s and St Thomas’ NHS Foundation.

The timeline on which Portola expects to launch Bevyxxa is between August and November 2017. During this period, Portola will complete salesforce hiring and training, drug manufacturing validation and inventory buildup. For more information regarding the availability of Bevyxxa, please go to www.bevyxxa.com.

In the EU, the European Medicines Agency’s Committee for Human Medicinal Products (CHMP) is reviewing the Marketing Authorization Application for betrixaban under its standard review period.