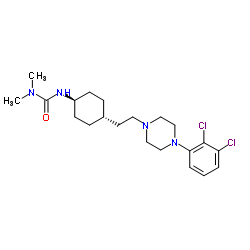 DUBLIN and BUDAPEST, Hungary, Sept. 17, 2015 /PRNewswire/ -- Allergan plc AGN, -2.12% and Gedeon Richter Plc. announced today that the U.S. Food and Drug Administration (FDA) has approved VRAYLAR™ (cariprazine) capsules, an atypical antipsychotic, for the acute treatment of manic or mixed episodes associated with bipolar I disorder and for treatment of schizophrenia in adults.

"We are pleased with the FDA approval of VRAYLAR, which represents an important new treatment option for adults living with bipolar I disorder and schizophrenia to help address the unmet medical needs of people with these complex conditions," said David Nicholson, Executive Vice President and President of Global R&D brands of Allergan. "This approval reinforces our deep commitment to the mental health community, as we continue to build our robust CNS portfolio."

Bipolar I disorder and schizophrenia are chronic and disabling mental health disorders. Bipolar I disorder, also known as manic-depressive illness, is a disorder of the brain that is characterized by fluctuations in mood, energy, activity levels, and the ability to carry out day-to-day tasks. Schizophrenia is characterized by delusions, hallucinations, disorganized speech and behavior, and other symptoms that cause social or occupational dysfunction.

"Bipolar I disorder and schizophrenia are serious, chronic and treatable conditions. The symptoms and response to treatment vary from patient to patient making these conditions challenging to manage," said Gary Sachs, MD, Founding Director of the Bipolar Clinic and Research Program at the Massachusetts General Hospital and Associate Professor of Psychiatry at Harvard Medical School.

The FDA approval of VRAYLAR is based on the results of three 3-week controlled trials in adults with manic or mixed episodes of bipolar I disorder and three 6-week placebo-controlled trials in adults with schizophrenia. In these clinical trials involving more than 2,700 adults, VRAYLAR demonstrated improvement compared to placebo as measured by Young Mania Rating Scale (YMRS) total scores in patients with bipolar mania and by Positive and Negative Syndrome Scale (PANSS) total scores in patients with schizophrenia. VRAYLAR also demonstrated efficacy as measured by the Clinical Global Impressions-Severity (CGI-S) rating scale, the secondary efficacy endpoints for both conditions.

"This approval is a notable achievement for Gedeon Richter's discovery platform," said Erik Bogsch, Managing Director of Richter Gedeon Plc. "Despite the variety of treatments available for the millions living with bipolar I disorder and schizophrenia, unmet needs remain and we are proud to offer an additional option to help patients manage their symptoms."

Schizophrenia is a chronic and disabling disorder that affects more than 2.6 million American adults. It imposes significant burden on patients, their families, and society. Symptoms fall into three broad categories: positive symptoms (hallucinations, delusions, thought disorders, and movement disorders), negative symptoms (such as loss of motivation and social withdrawal), and cognitive symptoms (problems with executive functioning, focusing, and working memory).

VRAYLAR was discovered and co-developed by Gedeon Richter Plc and is licensed to Actavis, now Allergan, in the U.S. and Canada.

Cariprazine is also being investigated for the treatment of bipolar depression and as adjunctive treatment for major depressive disorder in adults.

Visit www.VRAYLAR.com for more information on this once daily option for the acute treatment of manic or mixed episodes associated with bipolar I disorder and for the treatment of schizophrenia in adults.