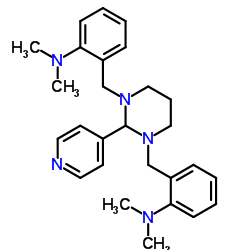 An experimental drug originally identified in a National Cancer Institute library of chemical compounds as a potential therapy for brain and basal cell cancers improves the symptoms of mice with a form of the debilitating neurological disorder multiple sclerosis (MS), according to new research from NYU Langone Medical Center.

The experimental drug employed by the NYU Langone team of neuroscientists is called GANT61. It blocks the action of a key protein, Gli1, which is involved in so-called sonic hedgehog signaling, a biological pathway closely tied to neural stem cell development and the growth of some cancers, and whose signaling is raised in tissue samples taken from brain lesions in patients with MS.

A report describing the findings is being published in the journal Nature online Sept. 30.

In the study, mice with chemically damaged brain myelin were given daily doses of GANT61 for one month. Results showed that mice that received the drug had 50 percent more myelin at the end of treatment than did untreated mice. Myelin is the nerve-protecting sheath whose degradation is a principal cause of MS.

Moreover, the researchers say, they found that the GANT61-treated mice had an eightfold increase in the number of neural stem cells that migrated to myelin-damaged areas of the brain and eventually developed into myelin-producing oligodendrocytes. Untreated mice did not show this increase.

Clinically, the researchers report, drug-treated mice were able to recover from an initial bout of MS-like paralysis and leg weakness. Untreated mice, however, endured repeated bouts of leg and bladder weakness, symptoms similar to those experienced by people with the disorder.

According to senior study investigator James Salzer, MD, PhD, the experiments, which took six years to complete, are believed to be the first to demonstrate that neural stem cells, and not just early forms of oligodendrocytic cells, can be modified and recruited into myelin repair. Current treatments that target the immune system mostly slow the disease, which primarily targets myelin in the brain and spinal cord, but clinical experts have not yet been able to repair scarred and degraded myelin.

Salzer, a professor at NYU Langone and its Helen and Martin Kimmel Center for Stem Cell Biology and Druckenmiller Neuroscience Institute, says the team's latest findings are also the first to show that drugs targeted at sonic hedgehog, a pathway first discovered in the 1980s, can potentially treat neurological disorders, such as MS.

The team's latest research, he says, is also the first strong evidence that in multiple sclerosis, targeting part of the sonic hedgehog pathway has a fundamentally different effect than blocking the entire pathway, which in other experiments elsewhere did not produce any remyelination but instead halted oligodendrocyte maturation.

"Our study results suggest that a potential long-term strategy for treating multiple sclerosis would involve treatments that separately target both neural stem cells, to help turn them into mature oligodendrocytes, as well as young and immature oligodendrocytes to produce more myelin," says Salzer.

"Our findings also make clear that there is a resident population of adult neural stem cells that we can target and recruit to treat the disorder," says Salzer.

Researchers say their latest findings and future projects affirm NYU Langone's commitment to studying the underlying causes and symptoms of MS, as well as developing treatments for the disorder. They also say their fundamental research into MS supports and underscores the integrated model of care employed at NYU Langone's Multiple Sclerosis Comprehensive Care Center.