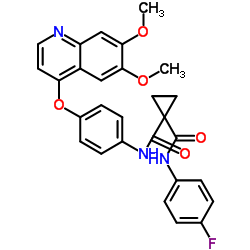 A new drug has been found superior to current treatments in slowing the growth of advanced kidney cancer in patients who became resistant to the first-line therapies that had kept it in check, according to results from a clinical trial led by Dana-Farber Cancer Institute.

Such patients are currently treated with everolimus (Affinitor), a second-line therapy, which can halt the cancer's growth for a time. But the new drug, cabozantinib, largely outperformed everolimus in the trial, according to a report published online in the New England Journal of Medicine and showed signs that it may prolong survival as well.

Cabozantinib controlled the cancer in the drug-resistant patients more effectively than everolimus. Moreover, the early results show a "strong trend indicating that survival may be improved in patients receiving cabozantinib compared to standard therapy," said Toni K. Choueiri, MD, clinical director of the Genitourinary Cancer Treatment Center at Dana-Farber Cancer Institute, the first author of the report. He said the drug has received breakthrough therapy designation by the Food and Drug Administration, and may become available soon for patients if it is approved. Choueiri is simultaneously presenting the results at the European Cancer Congress 2015 in Vienna on Saturday, September 26, at 4:20 p.m. in Hall D1 at the Messe Wien Exhibition & Congress Centre.

Whether the drug prolongs overall survival, and for how long, will not be known until more follow-up data are available.

Cabozantinib, an oral small molecule tyrosine kinase inhibitor, is being compared with everolimus in a phase 3 trial called METEOR, sponsored by Exelixis, Inc., the California company that makes cabozantinib. The main end point is progression-free survival - how long the cancer is held in check before it starts growing again.

Progression-free survival was a median of 7.4 months in patients receiving cabozantinib, versus 3.8 months with everolimus. The rate of progression or death was 42 percent lower with cabozantinib than everolimus. Cabozantinib shrank tumors effectively in 21 percent of patients, while everolimus' response rate was 5 percent.

Renal cell carcinoma is the most common form of kidney cancer, diagnosed annually in more than 330,000 patients worldwide and causing over 140,000 deaths. In the United States, those numbers are 61,560 and 14,080.

The multi-center trial enrolled 658 patients with clear cell renal carcinoma, which makes up over 80 percent of people with kidney cancer. The patients had advanced or metastatic renal cell carcinoma whose disease had worsened following first-line therapy with drugs that target the vascular endothelial growth factor receptor (VEGFR). Overproduction of the growth factor is a major driver of kidney cancer. Drugs that target VEGFR are standard therapy for advanced disease and can be very effective initially, but in many cases tumor cells find ways to escape the drugs' attack.

"Cabozantinib is a new drug that targets possible escape mechanisms, including the tyrosine kinases MET and AXL," said Choueiri, who is also the kidney cancer center director at Dana-Farber. The trial results show that cabozantinib "is able to shrink tumors and slow down tumor growth much better than current standard therapy in patients who previously received VEGFR-targeted drugs," he added.

Choueiri said cabozantinib is also being studied as a potential first-line treatment and is in early trials combining cabozantinib with immune checkpoint inhibitors.