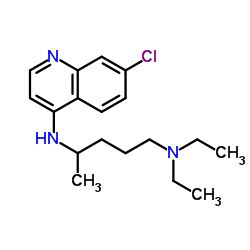 Chloroquine, a drug commonly given to prevent or treat malaria, targets "ductal carcinoma in situ," or DCIS, the most common type of pre-invasive breast cancer. DCIS is the main precursor to invasive, metastatic, and lethal, breast cancer.

DCIS shows up as white spots in a breast MRI. Those white spots are calcifications that may mark where DCIS cells are growing in the milk ducts, said Virginia "Ginny" Espina, a researcher at George Mason's Center for Applied Proteomics and Molecular Medicine who spearheaded the work and holds the patent with center co-director Lance Liotta. Not every instance of DCIS becomes cancer, but the majority of breast cancer goes through the DCIS stage, she said.

Chloroquine works by killing off the pre-invasive cells that are accumulating in the milk ducts. Any drug, including chloroquine, which acts on this same target is covered under the patent. The malaria drug has few side effects, Espina said.

The patent is a significant step in combating breast cancer because it will pave the way for drug companies to develop chloroquine-like treatments to kill the cancer before it starts, Liotta said.

Women could take chloroquine as a cancer preventative as a matter of course, Espina said.

And that's the spot the DCIS cells are in as they pile up in the milk duct. They're not getting enough oxygen and food and are squashed together.

"It's like being in a crowded elevator," Espina said. "You're next to people but not necessarily next to people you know or like. It's the same way for these tumor cells or pre-invasive cells. They're next to a cell, but they're crowded, hungry and not anchored anywhere, and cells like to be anchored and have a home.

"For all these reasons, they're under stress. When a cell is under stress, it's a life-and-death struggle. They're not just going to die. They're going to do what they can to survive."

Chloroquine works like Pepto-Bismol; it alters the cell's digestive process and stops them from making energy, Espina said. The pre-invasive cells die but the healthy cells are not affected.

Currently, patients with pre-invasive breast cancer are told to "watch and wait" or to have a lumpectomy or a preventative mastectomy, Liotta said.

"Some doctors tell patients to leave it alone and watch it over time because it may not become invasive, or recommend surgery followed by hormone-based and/or radiation treatment," Liotta said. "But we know that if you do nothing, then there's a high likelihood that the cells will become invasive. Chloroquine treatment provides an additional treatment option, even for those women who choose watchful waiting and surgical therapy."

In 2008, Espina developed the idea to use chloroquine against breast cancer cells after reading research and using the drug in another project. "We just tried it, which is how most of our advances have been made."

The research is part of an ongoing clinical trial, the PINC Trial (Preventing Invasive breast Neoplasia with Chloroquine).

When George Mason University breast cancer researcher and patent-holder Virginia "Ginny" Espina was in the fifth grade, she had her first glimpse of what cancer research looked like and how it could change lives.

After touring the Roswell Park Cancer Institute on a class field trip and seeing lung cancer-tobacco research in action, Espina and a classmate decided to create their own experiments.

The pair built an apparatus out of a Hot Wheels air pump and tubing. Then they made "cigarettes" out of whatever they could find on Espina's family farm outside of Buffalo, N.Y. They measured the residue left in the tubes to determine which "cigarette" would be the most harmful to lungs and found cocoa bean mulch would cause the most damage.

They never published their results.

"Nobody knew about our experiments because we weren't supposed to be playing with matches," Espina joked.

But the result of Espina's groundbreaking breast cancer research is clear--she now holds a patent that could change how breast cancer is treated and prevented. Espina has worked at George Mason's Center for Applied Proteomics and Molecular Medicine for a decade and holds the patentwith center co-director Lance Liotta.

Espina's approach uses chloroquine, a drug commonly given to prevent or treat malaria, to target "ductal carcinoma in situ," or DCIS, the most common type of pre-invasive breast cancer. DCIS is the main precursor to invasive, metastatic, and lethal, breast cancer. Read more about the treatment and patent here.

Growing up on a farm, Espina made the outdoors her laboratory. She found a horse skull and took it to her first grade class's show and tell. She examined how tendons worked when her father, a chemical engineer, gave her a pheasant's foot after a hunt. When it was hot in the summer and she and her three brothers wanted to go swimming, they had to build a dam in the creek.

Hands-on experience taught her more than lessons learned in a classroom. Textbooks were brought to life when she interned with a pathologist and assisted in autopsies while earning her medical technology degree from theRochester Institute of Technology. She later earned a master's degree in biotechnology from Johns Hopkins University and a doctorate in the same discipline from Mason in 2013.

Challenges are an everyday part of life in the lab. Failures are simply another way to gather information, she tells students.

"I want to find out what didn't work and how I can make it work," Espina said. "I love that challenge, that game, that puzzle to solve."

But for all the challenges, the end game for Espina is clear: "Cancer does kill people but now we have a better chance to survive it."

George Mason University is Virginia's largest public research university. Located near Washington, D.C., Mason enrolls more than 33,000 students from 130 countries and all 50 states. Mason has grown rapidly over the past half-century and is recognized for its innovation and entrepreneurship, remarkable diversity, and commitment to accessibility.