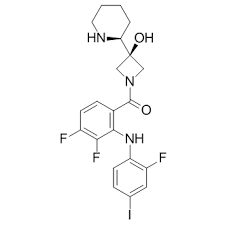 Roche announced that the U.S. Food and Drug Administration (FDA) approved Cotellic (cobimetinib) for the treatment of people with BRAF V600E or V600K mutation-positive unresectable or metastatic melanoma in combination with Zelboraf (vemurafenib). Cotellic and Zelboraf are not used to treat melanoma with a normal BRAF gene. Cotellic is Roche’s seventh new medicine approved by the FDA in the past five years.

“When used in combination, Cotellic and Zelboraf help delay disease progression and help people live significantly longer than with Zelboraf alone,” said Sandra Horning, M.D., Chief Medical Officer and Head of Global Product Development. “With this approval, people with this type of deadly and aggressive skin cancer now have a new targeted option.”

Today’s FDA approval is based on results from the Phase 3 coBRIM study, which showed Cotellic plus Zelboraf reduced the risk of disease worsening or death (progression-free survival; PFS) by about half in people who received the combination [HR=0.56, 95 percent CI (0.45-0.70); p<0.001], with a median PFS of 12.3 months for Cotellic plus Zelboraf compared to 7.2 months with Zelboraf alone1. An interim analysis also showed the combination of Cotellic and Zelboraf helped people live significantly longer (overall survival; OS) than Zelboraf alone (HR=0.63, 95 percent CI 0.47-0.85; p=0.0019). The objective response rate (tumor shrinkage) was higher with Cotellic plus Zelboraf compared to Zelboraf alone (70 vs. 50 percent; p<0.001), as was the complete response rate (complete tumor shrinkage, 16 vs. 11 percent).

Possible serious side effects with Cotellic include risk of skin cancers, increased risk of bleeding, heart problems that can lead to inadequate pumping of the blood by the heart, rash, eye problems, abnormal liver test or liver injury, increased levels of an enzyme in the blood, and photosensitivity. The most common side effects of Cotellic include diarrhea, sunburn or sun sensitivity, nausea, fever and vomiting. Cotellic can also cause changes in blood test results.

The final overall survival analysis from the coBRIM study will be presented at the Society for Melanoma Research 2015 International Congress (SMR) held in San Francisco, California from November 18-21.

In September, the Committee for Medicinal Products for Human Use (CHMP) at the European Medicines Agency (EMA) issued a positive opinion for Roche’s marketing authorization application for Cotellic in the European Union. A decision from the European Commission is expected before the end of 2015. Cotellic was approved in Switzerland by Swissmedic in August 2015.