Homepage > Company > Media > Pharma News > 2015 > Vertex Receives EU Approval for ORKAMBI® (lumacaftor/ivacaftor), the First Medicine to Treat the Underlying Cause of Cystic Fibrosis in People Ages 12 and Older with Two Copies of the F508del Mutation 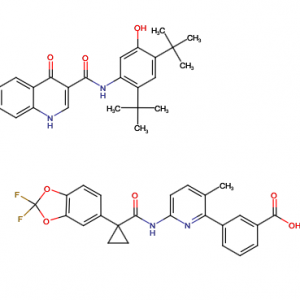 “For people with cystic fibrosis, the disease is a lifelong battle that becomes progressively more serious with repeated hospitalization due to lung infections. Until now, people with two copies of the F508del mutation have only had treatments for the symptoms and complications of the disease,” said Stuart Elborn, M.D., Dean, School of Medicine, Dentistry and Biomedical Sciences at Queen’s University Belfast, and a lead Principal Investigator for the Phase 3 TRAFFIC study. “The combination of lumacaftor and ivacaftor represents a step-change in the management of cystic fibrosis for these patients because it addresses the underlying cause of the disease. By doing so, it has shown meaningful and sustained benefits.”

Today’s approval is based on previously announced data from two 24-week global Phase 3 studies, TRAFFIC and TRANSPORT, and additional interim 24-week data from the subsequent extension study, PROGRESS, in people ages 12 and older who have two copies of the F508del mutation and were already being treated with standard-of-care medicines. In the TRAFFIC and TRANSPORT studies, which enrolled more than 1,100 patients, those treated with the combination of lumacaftor and ivacaftor experienced significant improvements in lung function. Patients also experienced improvements in body mass index (BMI) and reductions in pulmonary exacerbations (acute lung infections) including those requiring hospitalizations and intravenous antibiotic use. Interim data from PROGRESS showed that these improvements were sustained through 48 total weeks of treatment (24 weeks in TRAFFIC/TRANSPORT + 24 weeks in PROGRESS). In addition, the pattern and magnitude of response observed after the initiation of combination treatment across all patients who received placebo in TRAFFIC and TRANSPORT and subsequently received a combination regimen in PROGRESS were similar to those seen among patients who received a combination regimen in TRAFFIC and TRANSPORT.

“The EU approval of lumacaftor in combination with ivacaftor is a major milestone in our longstanding efforts to develop new medicines that treat the underlying cause of the disease for people with cystic fibrosis,” said Jeffrey Leiden, M.D., Ph.D., Vertex's Chairman, President and Chief Executive Officer. “This has been 17 years in the making and is the result of a collaborative effort with the CF community. Our goal now is to help ensure that those who need this medicine can get it, and to continue our work for the two out of three people with cystic fibrosis in Europe who still don’t have a treatment that addresses the underlying cause of their disease.”

CF is caused by a defective or missing cystic fibrosis transmembrane conductance regulator (CFTR) protein resulting from mutations in the CFTR gene. Children must inherit two defective CFTR genes — one from each parent — to have CF. There are approximately 2,000 known mutations in the CFTR gene. Some of these mutations, which can be determined by a genetic, or genotyping test, lead to CF by creating non-working or too few CFTR protein at the cell surface. The defective function or absence of CFTR proteins in people with CF results in poor flow of salt and water into and out of the cell in a number of organs. In the lungs, this leads to the buildup of abnormally thick, sticky mucus that can cause chronic lung infections and progressive lung damage in many patients that eventually leads to death. The median age of death is in the mid-to-late 20s.

About ORKAMBI® (lumacaftor/ivacaftor) and the F508del mutation

ORKAMBI is a combination of lumacaftor, which is designed to increase the amount of mature protein at the cell surface by targeting the processing and trafficking defect of the F508del-CFTR protein, and ivacaftor, which is designed to enhance the function of the CFTR protein once it reaches the cell surface. It is an oral pill taken every 12 hours - once in the morning and once in the evening.

For complete product information, please see the Summary of Product Characteristics that can be found on www.ema.europa.eu once posted.

Vertex initiated its CF research program in 1998 as part of a collaboration with CFFT, the nonprofit drug discovery and development affiliate of the Cystic Fibrosis Foundation. Both of our approved CF medicines were discovered by Vertex as part of this collaboration.