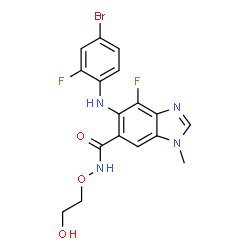 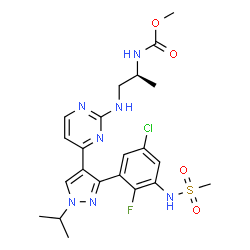 "The COLUMBUS Part 1 trial results demonstrate a robust PFS benefit associated with the combination of binimetinib plus encorafenib versus vemurafenib in patients with BRAF-mutant melanoma," said Ron Squarer, Chief Executive Officer, Array BioPharma. "We look forward to working with global regulatory authorities as they evaluate our planned submission."

"The preliminary results from Part 1 of COLUMBUS suggest that the combination of encorafenib plus binimetinib represents a potentially unique therapy for the BRAF-mutant melanoma population," said Keith T. Flaherty, M.D., Director of the Termeer Center for Targeted Therapy, Massachusetts General Hospital and Professor of Medicine, Harvard Medical School. "In addition to the robust activity observed in Part 1, the combination appeared to be generally well-tolerated."

Analysis of a secondary endpoint comparing the PFS of patients treated with combination to patients treated with encorafenib showed a median of 14.9 months versus 9.6 months with HR (0.75), [95% CI 0.56-1.00], p=0.051, which did not reach statistical significance. A complete analysis of these results will be provided to global regulatory authorities as part of planned submissions. In addition, data from Part 2 of the COLUMBUS trial are anticipated in mid 2017 and will also be provided to global health authorities as part of planned regulatory submissions for approval of these product candidates.

Further results from Part 1 of the COLUMBUS trial, including objective response rates, disease control rates, safety endpoints, exploratory analyses such as a Part 1 PFS comparison of encorafenib to vemurafenib and pre-specified subgroup analyses including outcomes in patients who received prior treatment with immunotherapy will be presented at an upcoming medical meeting. Analysis of the secondary endpoint of overall survival (OS) was not planned as part of these initial results.

Frédéric Duchesne, Chief Executive Officer Pharmaceutical Division, Pierre Fabre remarked, "We are very pleased with the COLUMBUS Part 1 results and look forward to the possibility that, if approved, the combination of encorafenib plus binimetinib could offer a new treatment option for patients suffering from this devastating disease."

About the Phase 3 COLUMBUS Study

The COLUMBUS trial, (NCT01909453), is a two-part, international, randomized, open label Phase 3 study evaluating the efficacy and safety of the combination of encorafenib plus binimetinib to vemurafenib and encorafenib monotherapy in 921 patients with locally advanced, unresectable or metastatic melanoma with BRAF V600 mutation. Prior immunotherapy treatment was allowed. Over 200 sites across North America, Europe, South America, Africa, Asia and Australia participated in the study. Patients were randomized into two parts:

In Part 2, 344 patients were randomized 3:1 to receive 300mg encorafenib plus 45mg binimetinib or 300mg encorafenib alone. Part 2 is designed to provide additional data to help evaluate the contribution of binimetinib to the combination. While formal statistical analysis of Part 2 is only planned if both the comparison of PFS between combination versus vemurafenib and the combination versus encorafenib achieve statistical significance in Part 1, data from Part 2 are anticipated in mid 2017 and will be provided to global health authorities as part of planned regulatory submissions in 2017.

Binimetinib and encorafenib are investigational medicines and are not currently approved in any country.

Melanoma is the fifth most common cancer among men and the seventh most common cancer among women in the United States, with more than 76,000 new cases and over 10,000 deaths from the disease expected in 2016. Novel therapies that target the RAS/RAF/MEK/ERK pathway have a strong scientific rationale for activity in this disease, as up to 50 percent of patients with metastatic melanoma have activating BRAF mutations, the most common gene mutation in this patient population. Current marketed MEK/BRAF combination agents have a run rate forecasted to approach $1 billion in annual worldwide sales.

MEK and BRAF are key protein kinases in the MAPK signaling pathway (RAS-RAF-MEK-ERK). Research has shown this pathway regulates several key cellular activities including proliferation, differentiation, survival and angiogenesis. Inappropriate activation of proteins in this pathway has been shown to occur in many cancers, such as melanoma, colorectal and thyroid cancers. Binimetinib is a late-stage small molecule MEK inhibitor and encorafenib is a late-stage small molecule BRAF inhibitor, both of which target key enzymes in this pathway.

Binimetinib and encorafenib are being studied in clinical trials in advanced cancer patients, including the recently initiated Phase 3 BEACON CRC trial that will study encorafenib in combination with cetuximab with or without binimetinib in patients with BRAF V600E-mutant colorectal cancer. Array submitted a New Drug Application (NDA) for binimetinib in NRAS-mutant melanoma to the FDA at the end of June 2016. The FDA accepted the NDA with a target action date under the Prescription Drug User Fee Act (PDUFA) of June 30, 2017.

Array BioPharma retains exclusive rights to binimetinib and encorafenib in key markets including the U.S. and Japan.

Pierre Fabre is a French private pharmaceuticals and dermo-cosmetics company founded in 1962 by Mr. Pierre Fabre.  Its turnover reached over 2.2 billion Euros in 2015, spread over 130 countries. The company is structured around two divisions: Pharmaceuticals (prescription drugs, consumer health care) and Dermo-cosmetics (including the Europe and Asia market-leader brand Eau Thermale Avène). Pierre Fabre employs some 13,000 people worldwide and owns subsidiaries in 43 countries. In 2015, the company allocated 16% of its pharmaceuticals sales to R&D with a focus on 4 therapeutic areas: oncology, dermatology, CNS and consumer health care.

Through the Group's controlling company Pierre Fabre Participations, Pierre Fabre is 86% owned by the Pierre Fabre Foundation, a recognized public-interest organization since 1999. Up to 8% of the remaining shares are held by the company's employees and the remaining balance is held as treasury stock.