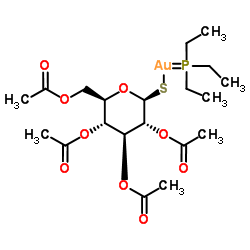 An anti-rheumatic drug could improve the prognosis for ovarian cancer patients exhibiting a deficiency of the DNA repair protein BRCA1, a study suggests.

Auranofin is currently undergoing trials for repurposing to treat recurrent epithelial ovarian cancer, which makes up around 90 per cent of diagnosed ovarian cancers.

The findings are presented in a study jointly funded by The Magic Rainbow Appeal within Plymouth Hospitals NHS Trust and Plymouth University, and published in Mutation Research: Fundamentals and Molecular Mechanisms of Mutagenesis.

Awadhesh Jha, Professor of Toxicology and Associate Head (Research) in the School of Biological Sciences, is the corresponding author of the study with Post-Doctoral Research Fellow Dr Deepu Oommen having carried out the laboratory tests.

Professor Jha said: "Using drugs such as auranofin to treat cancer is highly promising since they are readily available and their pharmacological and toxicological properties are well documented. Studies carried out with cells grown under laboratory conditions showed faults in the BRCA1 gene render these cells more vulnerable to auranofin compared to ovarian cancer cells with normal BRCA1 genes. It suggests that auranofin has the potential to be considered for future clinical studies to treat such ovarian cancers and this could serve as the spring board to use other available drugs which are not used as chemotherapeutic drugs."

For this test, two types of ovarian cancer cells (OVCAR5 and SKOV3) were used, with BRCA1 expression levels depleted and compared to a control set.

SKOV3 cells were relatively sensitive to auranofin generally, however upon BRCA1 depletion, cell survival was significantly reduced by up to 37% with an auranofin concentration of 1 parts per million. BRCA-1 depleted OVCAR5 cells also exhibited decreased survival, and thereby increased sensitivity to auranofin in a dose-dependent manner.

Dr Dennis Yiannakis, Clinical Oncologist at the Plymouth Hospitals NHS Trust, said: "Our collaboration has focused on the field of DNA repair (particularly BRCA 1/2 mutated states) and its relevance to ovarian and lung cancer. The project is investigating the accurate diagnosis of faults in high fidelity DNA repair and how to manipulate it for therapeutic benefit in patients. This is an emerging area of potential ways of treating these cancers."