BOULDER, CO, USA -- August 23, 2016-- Clovis Oncology, Inc. (NASDAQ: CLVS) announced today that the U.S. Food and Drug Administration (FDA) has accepted Clovis’ New Drug Application (NDA) for accelerated approval of rucaparib and granted priority review status to the application with a Prescription Drug User Fee Act (PDUFA) date of February 23, 2017. In late June 2016, Clovis completed its NDA submission of rucaparib to the FDA for the treatment of advanced ovarian cancer in patients with deleterious BRCA-mutated tumors inclusive of both germline and somatic BRCA mutations (as detected by an FDA-approved test), and who have been treated with two or more chemotherapies. Rucaparib was granted Breakthrough Therapy Designation for the proposed indication by the FDA in April 2015. 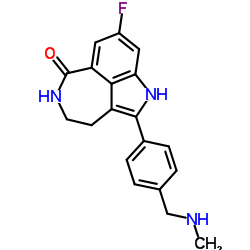 “The acceptance of the rucaparib NDA submission represents an important milestone for rucaparib, and for Clovis,” said Patrick J. Mahaffy, President and CEO of Clovis Oncology. “There is tremendous need for additional therapeutic options for patients with advanced mutant BRCA ovarian cancer and we look forward to cooperating with FDA on the rucaparib NDA review.”“Recurrent ovarian cancer remains a very difficult disease to treat, even among women who carry, or whose tumors have a mutation in the BRCA genes. Despite the available treatment options, few effective therapies are at our disposal. Thus, the opportunity to treat women with germline or somatic BRCA mutations with rucaparib after two prior lines of platinum-based therapy, represents a meaningful step forward for our patients,” said Robert L. Coleman, MD, Professor & Deputy Chairman, Vice Chair, Clinical Research, Ann Rife Cox Chair in Gynecology, Department of Gynecologic Oncology and Reproductive Medicine at University of Texas MD Anderson Cancer Center in Houston and one of the Principal Investigators in the ARIEL clinical trial program.Foundation Medicine, Clovis’ companion diagnostic partner, has submitted a Premarket Approval (PMA) application for its FoundationFocus CDxBRCA to the FDA in June 2016. The test is designed to identify tumor BRCA mutations, including germline and somatic BRCA mutations. The timing of the submission is expected to allow for regulatory approval of the companion diagnostic in a similar timeframe.About RucaparibRucaparib is an oral, small molecule inhibitor of PARP1, PARP2 and PARP3 being developed for advanced ovarian cancer.Specifically, rucaparib is being developed as monotherapy treatment of advanced ovarian cancer in patients with deleterious BRCA-mutated tumors inclusive of both germline and somatic BRCA mutations (as detected by an FDA-approved test) who have been treated with two or more chemotherapies. Rucaparib was granted Breakthrough Therapy Designation for this proposed indication by the U.S. FDA in April 2015; and in late June 2016, Clovis completed its New Drug Application (NDA) submission to the FDA. The filing for treatment was accepted and has an action date of February 23, 2017. Rucaparib’s Marketing Authorization Application (MAA) to the European Medicines Agency for the proposed treatment indication is planned for Q4 2016.Additionally, rucaparib is being developed as maintenance therapy in the ARIEL3 trial (NCT01968213) for patients with tumors with BRCA mutations and other DNA repair deficiencies beyond BRCA (commonly referred to as homologous recombination deficiencies, or HRD). Data from ARIEL3 are expected in Q4 2017, which is expected to be followed by the submission of a supplemental NDA for second-line maintenance therapy.Clovis is also exploring rucaparib in other solid tumor types with BRCA and HRD populations, including prostate, breast and gastroesophageal cancers.Clovis holds worldwide rights for rucaparib.About Ovarian CancerAccording to the American Cancer Society, more than 22,000 women will be diagnosed with ovarian cancer in the U.S. during 2016. There are often no clearly identifiable initial symptoms, and in an estimated 80 to 85% of ovarian cancer cases, the cancer has spread to other parts of the body before a person is diagnosed and can be treated. Ovarian cancer ranks fifth in cancer deaths and causes more deaths than any other cancer of the female reproductive system. One in four women with ovarian cancer have a germline or somatic BRCA mutation, and new treatment options are needed to treat unique patient populations.About Clovis OncologyClovis Oncology, Inc. is a biopharmaceutical company focused on acquiring, developing and commercializing innovative anti-cancer agents in the U.S., Europe and additional international markets. Clovis Oncology targets development programs aimed at specific subsets of cancer populations, and simultaneously develops diagnostic tools that direct a compound in development to the population that is most likely to benefit from its use. Clovis Oncology is headquartered in Boulder, Colorado.SOURCE: Clovis Oncology