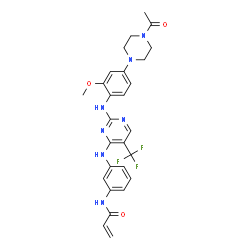 (Reuters) - An independent panel of experts advising the U.S. Food and Drug Administration recommended that Clovis Oncology Inc's lung cancer drug not be approved based on existing trial data.

The panel voted 12-1 against giving the drug an accelerated approval, and recommended the FDA wait for the results from an ongoing late-stage trial that compares the drug's effect to that of chemotherapy.

Clovis's shares tumbled as much as 18.7 percent on Tuesday. They recovered slightly to trade down 12.5 percent at $13.18 in late afternoon trading.

An accelerated approval would allow Clovis to conditionally market the drug, rociletinib, based on early evidence of its clinical benefit.

Rociletinib is designed to treat a subset of patients with advanced non-small cell lung cancer (NSCLC) whose condition has worsened despite treatment. It targets patients with a genetic mutation known as T790M that helps tumors evade current lung cancer pills.

The panel said existing data on rociletinib did not adequately characterize its benefit-risk profile over current treatments, especially Tagrisso, and also expressed uncertainty about the proposed dose.

Further, some panel members raised questions about whether the ongoing late-stage study on rociletinib was designed to address these concerns. Enrollment in the trial is expected to be completed in 2018.

Clovis Chief Executive Patrick Mahaffy said the company would work with the FDA to determine the best past forward.

The FDA is not obligated to follow the panel's recommendations, but typically does. The agency is expected to announce its final decision on the drug by June 28.

On Friday, FDA scientists had also raised questions about whether rociletinib was superior to existing treatments.

They recommended that the drug carry a black-box warning, the strictest warning imposed by the FDA, of increased heart risk.

If approved, rociletinib will likely play second fiddle to Tagrisso, given that its efficacy compares poorly with that of AstraZeneca's treatment, Piper Jaffray analyst Charles Duncan had said in a note in February.

Lung cancer is the leading cause of cancer-related death, and about 85 percent of those diagnosed have NSCLC. An estimated 224,390 new cases of lung cancer and 158,080 related deaths occurred in the United States last year, according to the FDA.

(Reporting by Natalie Grover and Amrutha Penumudi in Bengaluru; Editing by Savio D'Souza and Don Sebastian)