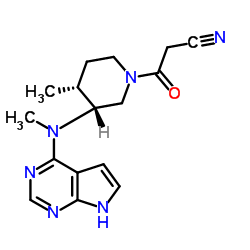 In one study, 18.5% of patients who received 10 milligrams of tofacitinib twice a day achieved remission, including no rectal bleeding, after eight weeks compared to 8.2% of patients who received a placebo.In another study, 16.6% of tofacitinib patients achieved remission, versus 3.6% for placebo.A significantly higher number of tofacitinib patients also experienced mucosal healing, which the key secondary endpoint in both trials.Pfizer said safety findings for tofacitinib in both the studies were similar to those found in other tofacitinib investigational clinical trials.UC is expected to lead to complex interactions between various factors such as the environment, genetic predisposition, immune response, and the gut microbiome in the colon or intestines.It can result in abdominal pain, fever, weight loss and chronic, bloody diarrhea.Tofacitinib is a drug of the janus kinase inhibitor class, discovered and developed by the National Institutes of Health and Pfizer. It is marketed as Xeljanz and Jakvinus.Xeljanz is approved in over 45 countries globally to treat moderate to severe rheumatoid arthritis (RA) as a second-line therapy after failure of one or more disease-modifying antirheumatic drugs.The efficacy and safety profile of Xeljanz has been studied in about 6,200 patients with moderate to severe RA, resulting in more than 19,400 patient-years of drug exposure in the worldwide clinical development program.PBR Staff WriterPublished 21 March 2016Source: http://clinicaltrials.pharmaceutical-business-review.com/