Psychedelic drugs such as LSD have a profound impact on human consciousness, particularly perception. Researchers at Yale and the University of Zurich provide new insight into the psychedelic effects of LSD on the brain and potential therapeutic uses of the drug. 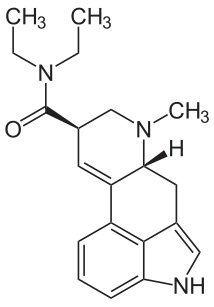 The new data indicate that LSD triggers a reduction of functional connections between regions of the brain governing cognitive processes and increases connectivity in brain networks associated with sensory functions. It does so by stimulating a particular receptor for the neurotransmitter serotonin (serotonin-2A or 5HT2A receptor). The 5HT2A receptor has been implicated in the regulation of mood and cognition.

Using gene expression maps and data-driven tools to measure brain-wide communication, the team was able to infer the patterns of brain signals in subjects who had taken LSD and identify the 5HT2A receptor as a crucial mechanism leading to changes in perception and thought.

"There is a net effect of LSD on the entire brain but the effect is not uniform," explained Alan Anticevic, assistant professor of psychiatry and psychology and co-senior author of the paper, which appears in the journal eLife.

In recent years, scientists have become increasingly interested in the use of psychedelics to treat mental health disorders such as depression. While serotonin plays a key role in maintaining mood balance and decreased levels are associated with depression, another immediate impact of the new findings may be in the treatment of schizophrenia, Anticevic suggested.

Most schizophrenia patients are treated with atypical antipsychotic drugs, which block some of the serotonin receptors identified by the new study. However, many patients don't respond well to such treatments.

"Clinicians may be able to identify individual patients most likely to benefit from these drugs by looking for similar patterns of brain activity identified in the study," noted Katrin Preller, assistant professor at the University of Zurich and visiting professor at Yale, who is the lead author of the paper.

Using a technology optimized by Anticevic and Dr. John Murray, assistant professor of psychiatry at Yale and co-author on the paper, researchers pinpointed gene activity in the brain and showed how it influences neurotransmitter function.

In the 1960s, Yale researchers Daniel X. Freedman, Nicholas Giarman, and George Aghajanian first implicated the serotonin system, and the 5HT2A receptor, in the actions of LSD, noted Dr. John Krystal, professor and chair of psychiatry at Yale.

"It has taken over 50 years and technical advances in brain imaging and molecular neuroscience to enable us to build on the earlier work in mechanistic clinical research," Krystal said. "This path, and other related research strategies will take us deeper in our search for the roots of human consciousness and the biology of mental illness."

Explore further: LSD blurs boundaries between the experience of self and other