CAMBRIDGE, Mass.-- (BUSINESS WIRE)--Alnylam Pharmaceuticals, Inc. (Nasdaq:ALNY), the leading RNAi therapeutics company, announced today that the ENVISION Phase 3 study of givosiran, an investigational RNAi therapeutic targeting aminolevulinic acid synthase 1 (ALAS1) in development for the treatment of acute hepatic porphyria (AHP), met its primary efficacy endpoint and the majority of secondary endpoints. Specifically, givosiran met the primary endpoint of reduction in the annualized rate of composite porphyria attacks relative to placebo (p less than 0.00000001) and achieved statistically significant results for five of nine secondary endpoints (p less than 0.0001), with a safety and tolerability profile that the Company believes is encouraging, especially in this high unmet disease. Based on these results, the Company plans to complete its rolling submission of a New Drug Application (NDA) and file a Marketing Authorisation Application (MAA) in mid-2019. 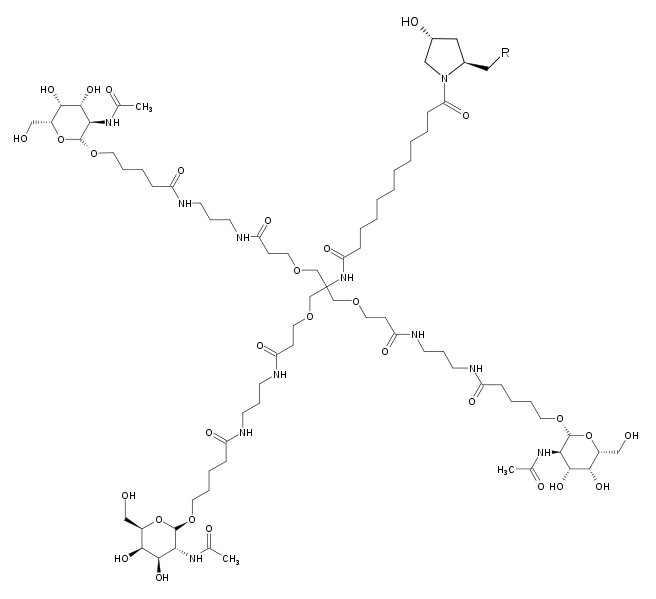 “Patients living with AHP experience debilitating and sometimes life-threatening neurovisceral attacks as well as chronic disease manifestations which negatively impact their quality of life. We believe the ENVISION results demonstrate a robust therapeutic benefit of givosiran treatment on the debilitating aspects of this disease. Based on these results, we believe givosiran has the potential, if approved, to be a transformative medicine for AHP patients and their families,” said Akshay Vaishnaw, M.D., Ph.D., President, R&D at Alnylam. “We extend our profound thanks to all the patients, investigators, and study staff who participated in the ENVISION study.”

“These positive ENVISION results represent another landmark event in Alnylam’s pioneering efforts to advance RNAi therapeutics as a whole new class of medicines. Notably, givosiran is the first GalNAc-conjugate siRNA to achieve positive Phase 3 results, and the second example of Alnylam’s R&D strategy bearing fruit due to our focus on genetically validated targets for the advancement of potential high impact medicines,” said John Maraganore, Ph.D., CEO of Alnylam. “Assuming favorable regulatory review, we very much look forward to adding givosiran as the second product in our global commercialization efforts. Indeed, we believe today’s news brings us one important step closer to meeting our Alnylam 2020 goals of building a multi-product, global commercial company with a deep clinical pipeline for continued growth and a robust product engine for sustainable innovation.”

Givosiran has received Breakthrough Therapy and Prime designation by the FDA and EMA, respectively, and has Orphan Drug status in the U.S. and EU for the treatment of AHP. The Phase 1 results of givosiran were recently published in The New England Journal of Medicine1. Full ENVISION study results will be presented in an oral plenary session on Saturday, April 13 at EASL in Vienna, Austria. The ENVISION results have not yet been reviewed by regulatory authorities.

ENVISION, a randomized, double-blind, placebo-controlled trial, enrolled 94 patients with AHP (including 89 with genetically-confirmed acute intermittent porphyria [AIP], the most common subtype of AHP), at 36 study sites in 18 countries around the world, and is the largest ever interventional study conducted in AHP. Patients were randomized 1:1 to givosiran or placebo, with givosiran administered subcutaneously at 2.5 mg/kg monthly. The primary endpoint for the study was reduction relative to placebo in the annualized rate of composite porphyria attacks, defined as those requiring hospitalization, urgent healthcare visit, or hemin administration, in patients with AIP over six months.

Adverse events (AEs) were reported in 43/48 (89.6 percent) of givosiran and 37/46 (80.4 percent) of placebo patients and serious adverse events (SAEs) were reported in 10/48 (20.8 percent) of givosiran and 4/46 (8.7 percent) of placebo patients. There were no deaths in the study. One patient, described below, in the givosiran arm (2.1 percent) discontinued treatment due to an AE. AEs reported in greater than 10 percent of givosiran patients and seen more frequently compared to placebo were: nausea, injection site reactions, chronic kidney disease and fatigue; those reported in greater than 10 percent of placebo patients and seen more frequently than in givosiran-treated patients were headache, urinary tract infection, vomiting and pyrexia. The AEs of chronic kidney disease were reported in five givosiran-treated patients (10.4 percent) and no placebo patients; these events were all in patients with renal dysfunction at baseline and patients continued dosing throughout the study. Liver transaminase increases greater than three times upper limit of normal (ULN) were observed in 7/48 (14.6 percent) patients on givosiran and 1/46 (2.2 percent) patients on placebo; all had evidence of iron overload or liver disease at baseline. As previously reported and as noted above, one patient on givosiran discontinued treatment due to an increase in alanine aminotransferase (ALT) levels greater than 8 times ULN, a protocol-defined stopping rule; this elevation did not meet Hy’s Law and subsequently resolved. Peak ALT levels in the other six givosiran-treated patients ranged from 3.0-5.4 times ULN and were not accompanied by bilirubin increases. The patients were asymptomatic, and all events resolved with continued dosing (n=5) or after a brief pause in dosing (n=1).

AHP refers to a family of rare, genetic diseases characterized by potentially life-threatening attacks and for some patients chronic debilitating symptoms that negatively impact daily functioning and quality of life. AHP is comprised of four subtypes, each resulting from a genetic defect leading to deficiency in one of the enzymes of the heme biosynthesis pathway in the liver: AIP, hereditary coproporphyria (HCP), variegate porphyria (VP), and ALAD-deficiency porphyria (ADP). These defects cause the accumulation of neurotoxic heme intermediates aminolevulinic acid (ALA) and porphobilinogen (PBG), with ALA believed to be the primary neurotoxic intermediate responsible for causing both attacks and ongoing symptoms between attacks. Common symptoms of AHP include severe, diffuse abdominal pain, weakness, nausea, and fatigue. The nonspecific nature of AHP signs and symptoms can often lead to misdiagnoses of other more common conditions such as irritable bowel syndrome, appendicitis, fibromyalgia, and endometriosis, and consequently, patients afflicted by AHP often remain without a proper diagnosis for up to 15 years. In addition, long-term complications of AHP and its treatment can include chronic neuropathic pain, hypertension, chronic kidney disease and liver disease, including iron overload, fibrosis, cirrhosis and hepatocellular carcinoma. Currently, there are no treatments approved to prevent debilitating attacks or to treat the chronic manifestations of the disease.

Givosiran is an investigational, subcutaneously administered RNAi therapeutic targeting aminolevulinic acid synthase 1 (ALAS1) in development for the treatment of AHP. Monthly administration of givosiran has the potential to significantly lower induced liver ALAS1 levels in a sustained manner and thereby decrease neurotoxic heme intermediates, aminolevulinic acid ALA and PBG, to near normal levels. By reducing accumulation of these intermediates, givosiran has the potential to prevent or reduce the occurrence of severe and life-threatening attacks, control chronic symptoms, and decrease the burden of the disease. Givosiran utilizes Alnylam’s Enhanced Stabilization Chemistry ESC-GalNAc conjugate technology, which enables subcutaneous dosing with increased potency and durability and a wide therapeutic index. The safety and efficacy of givosiran were evaluated in the ENVISION Phase 3 trial with positive results; these results have not been evaluated by the FDA, the EMA or any other health authority and no conclusions should be drawn regarding the safety and effectiveness of this investigational therapeutic.

RNAi (RNA interference) is a natural cellular process of gene silencing that represents one of the most promising and rapidly advancing frontiers in biology and drug development today. Its discovery has been heralded as “a major scientific breakthrough that happens once every decade or so,” and was recognized with the award of the 2006 Nobel Prize for Physiology or Medicine. By harnessing the natural biological process of RNAi occurring in our cells, a new class of medicines, known as RNAi therapeutics, is now a reality. Small interfering RNA (siRNA), the molecules that mediate RNAi and comprise Alnylam's RNAi therapeutic platform, function upstream of today’s medicines by potently silencing messenger RNA (mRNA) – the genetic precursors – that encode for disease-causing proteins, thus preventing them from being made. This is a revolutionary approach with the potential to transform the care of patients with genetic and other diseases.

Alnylam (Nasdaq: ALNY) is leading the translation of RNA interference (RNAi) into a whole new class of innovative medicines with the potential to transform the lives of people afflicted with rare genetic, cardio-metabolic, hepatic infectious, and central nervous system (CNS)/ocular diseases. Based on Nobel Prize-winning science, RNAi therapeutics represent a powerful, clinically validated approach for the treatment of a wide range of severe and debilitating diseases. Founded in 2002, Alnylam is delivering on a bold vision to turn scientific possibility into reality, with a robust discovery platform. Alnylam’s first U.S. FDA-approved RNAi therapeutic is ONPATTRO® (patisiran) lipid complex injection available in the U.S. for the treatment of the polyneuropathy of hereditary transthyretin-mediated (hATTR) amyloidosis in adults. In the EU, ONPATTRO is approved for the treatment of hATTR amyloidosis in adults with stage 1 or stage 2 polyneuropathy. Alnylam has a deep pipeline of investigational medicines, including five product candidates that are in late-stage development. Looking forward, Alnylam will continue to execute on its "Alnylam 2020" strategy of building a multi-product, commercial-stage biopharmaceutical company with a sustainable pipeline of RNAi-based medicines to address the needs of patients who have limited or inadequate treatment options. Alnylam employs over 1,000 people worldwide and is headquartered in Cambridge, MA. For more information about our people, science and pipeline, please visit www.alnylam.com and engage with us on Twitter at @Alnylam or on LinkedIn.