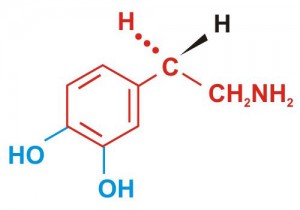 Dopamine
Insulin, the hormone essential to all mammals for controlling blood sugar levels and a feeling of being full after eating, plays a much stronger role than previously known in regulating release of dopamine, a neurotransmitter that helps control the brain's reward and pleasure centers, new studies by researchers at NYU Langone Medical Center show.

"We found that when there's more insulin in the brain, there will be more dopamine released, not less," says study senior investigator and NYU Langone neuroscientist Margaret Rice, PhD. Her team's new findings from laboratory and behavioral studies with rodents are set to appear in the journal Nature Communications online Oct. 27.

Rice says the experiments she and her colleagues conducted not only reaffirm that insulin helps trigger the reuptake of dopamine when insulin levels rise, but also are the first to show that the net effect is a rise in dopamine levels. The results may also be the first to demonstrate that insulin's role in the dopamine pathway may affect and explain food choices.

In one set of experiments, Rice and her colleagues recorded a 20 percent to 55 percent increase in dopamine released in the striatal region of the rodent brain (where dopamine's effects on the brain are felt and which governs the body's response to getting a reward). The rise occurred along the same timeframe as the rise in insulin activity needed to process any food sugars the mice and rats ate. And this occurred despite the reabsorption, or reuptake, of dopamine that in other regions of the brain tells an animal that its appetite is satisfied.

Rice and study co-principal investigator Kenneth Carr, PhD, also conducted separate experiments with rats in which they found that animals fed low-calorie diets had a 10-fold greater sensitivity to increasing insulin levels in the brain (meaning that it took only a tenth of a rise in insulin levels as seen in rats on a normal diet to spur dopamine release). By contrast, rats on high-calorie diets lost all striatal-brain insulin responsiveness. In addition, rats offered a choice between a drink reward that was paired with either an insulin antibody injection to block hormone signaling or a mock placebo injection always favored the drink-injection combination that led to intact insulin signaling (and more dopamine).

"Our work establishes what we believe is a new role for insulin as part of the brain's reward system and suggests that rodents, and presumably people, may choose to consume high-carb or low-fat meals that release more insulin - all to heighten dopamine release," says Rice, a professor in the Department of Neurosurgery at NYU Langone and a member of NYU Langone's Druckenmiller Neuroscience Institute.

Rice says this finding is important because chronically elevated insulin levels and lowered insulin sensitivity in the brain are closely tied to obesity and type II diabetes, both very prevalent in the United States.

Rice says the team plans further experiments on how insulin influences the mammalian brain's control over food motivation and reward pathways, and whether changes in insulin sensitivity brought about by obesity can be reversed or even prevented.

"If our future experiments prove successful," says Rice, "it could confirm our hypothesis that when people refer to an insulin-glucose rush, they may really be referring to a dopamine reward rush. And there are healthy ways to get that by making smart food choices."