ARIAD Initiates Submission of New Drug Application for Brigatinib to the U.S. Food and Drug Administration Ahead of Plan 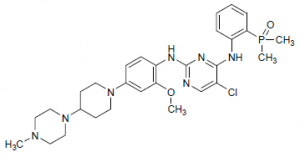 CAMBRIDGE, Mass.--(BUSINESS WIRE)--ARIAD Pharmaceuticals, Inc. (NASDAQ:ARIA) today announced the initiation of a New Drug Application (NDA) submission for its investigational anaplastic lymphoma kinase (ALK) inhibitor, brigatinib, to the U.S. Food and Drug Administration (FDA). ARIAD is seeking U.S. marketing approval of brigatinib for patients with ALK+ non-small cell lung cancer (NSCLC) who are resistant to crizotinib. Brigatinib received Breakthrough Therapy designation from the FDA for the treatment of patients with ALK+ NSCLC whose tumors are resistant to crizotinib, and was granted orphan drug designation by the FDA for the treatment of ALK+ NSCLC. The Company is seeking accelerated approval for brigatinib from the FDA and plans to request a priority review of the application.