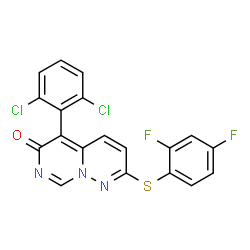 Major efficacy findings from the clinical phase 2a studies are as follows:-- Statistically significant improvement in tests of episodic memory and learning; as assessed by Wechsler Memory Scale (WMS)    immediate    and delayed recall composite measures in Study 302, and Hopkins Verbal Learning Test – Revised (HVLT-R) in Study 303

In addition, neflamapimod at a dose level up to 125 mg twice daily for 12 weeks was very well tolerated in patients with Alzheimer's disease, and neflamapimod was confirmed to be blood-brain-barrier penetrant in humans."Neflamapimod treatment showed improvement in memory tests that assess immediate and delayed recall in both Phase 2a studies, strongly suggestive of reversal of synaptic dysfunction.  In addition, in our study, 12 weeks treatment at a 40 mg dose level led to a reductions in brain amyloid plaque load, as assessed by dynamic PET scanning," said Professor Philip Scheltens the principal investigator for Study 302 and Director of the Alzheimers Centre at the VU Medical Center in Amsterdam, Netherlands.  "With the demonstration of proof-of-mechanism and the definition of an optimal dose, neflamapimod is well positioned to demonstrate proof-of-concept on clinical cognitive endpoints in a next study in patients with early Alzheimer's disease."Design of StudiesStudy 302 (12-week treatment)

Sixteen patients (aged 60 to 85 years) with MCI due to AD or mild AD were randomized on a blinded basis to 40mg or 125mg neflamapimod twice daily with food for 12 weeks. The main efficacy endpoint was a change in amyloid load as measured quantitatively using dynamic [11C]-PiB ("Pittburgh-B") PET scans, performed at baseline and at end of treatment (Day 84), analyzed by reference parametric mapping (RPM2) using cerebellum as reference tissue (Yaqub et al, 2008). As the quantitative dynamic approach to PET scanning reduces test-retest variability to 2-3%, the pre-specified responder definition was a >7% reduction in PET signal. Secondary outcome measures included change in Wechsler Memory Scale (WMS) and Mini-Mental-Status-Examination (MMSE).

Patients with MCI due to AD or mild AD and an MRI consistent with AD were included. Originally, 16 patients were to be randomized to either 40 mg or 125 mg neflamapimod twice daily with food for six weeks.  However, after 3 subjects were enrolled, the higher dose group was discontinued due to US-specific regulatory authority requirement to limit dosing to expected plasma drug exposure levels providing ten-fold safety margin relative to long-term animal toxicology findings.   Cerebrospinal fluid (CSF) cytokines and Aβ peptides were assessed at Baseline and at week 6 (end-of-treatment), and intensive plasma and CSF pharmacokinetics obtained on Days 1 and 41.  Verbal learning/episodic memory was assessed with the Hopkins Verbal Learning Test – Revised (HVLT-R).   MMSE evaluated at screening and Day 40.

Amyloid PET:  40 mg dose level showed lowering of quantitatively measured brain amyloid plaque load with 12 weeks of neflamapimod treatment: 3 of 8 patients demonstrated greater than the pre-specified response criteria of 7% reduction (-11.6%, -11.9% and -40% in PET signal, respectively, for the 3 responder patients) and 2 patients were between 3 and 7% reduction.  In addition, one patient at 125 mg with plasma drug concentration equal to that of 40mg also met the response criteria (-7.1%).

Neflamapimod was very well tolerated, and no safety signal was identified.  There were no severe or serious adverse events reported across the two studies.  One subject discontinued treatment prematurely; this Study 303 subject discontinued within the first week because of headache and vomiting, attributed to persistent CSF leak after baseline CSF collection; all other subjects completed treatment as scheduled.

The most common adverse events across the two studies were mild somnolence (sleepiness or drowsiness) reported in 5 patients, and self-limited mild diarrhea (loose stools) reported in 4 patients.   There was also one event of moderate diarrhea, which was considered not-related, as the event did not recur during additional 8 weeks of treatment after having resolved during a brief treatment interruption.  Within Study 303, mild back pain and mild headache were reported in 4 patients each, possibly related to the CSF collection, as these events were not reported in Study 302.  There were no treatment‑related or clinically relevant trends in the analysis of safety laboratory and 12-lead ECG parameters.CSF drug concentrations were 6% of plasma drug level at matched time points.  As this level of CSF drug concentration in preclinical studies was associated with brain drug concentration levels that were twice that of blood drug concentration, these results indicate that neflamapimod is blood-brain-barrier penetrant in humans.About neflamapimod (VX-745) and p38 MAPKα

EIP Pharma is developing neflamapimod under the terms of a development & commercialization license for VX-745 obtained in 2014 from Vertex Pharmaceuticals Inc.  Phase 1 and Phase 2a clinical trials in non-CNS disease, and chronic animal toxicology studies had previously been completed by Vertex.In the healthy brain, p38 MAPKa regulates inflammation through effects on immune cells.  In conditions of stress and disease, p38 MAPKα is also expressed in neurons; where it plays a major role in inflammation and/or amyloid beta induced synaptic toxicity, including the impairment of synaptic plasticity that is a major driver of the development of deficits in learning and memory formation which are defining characteristics of Alzheimer's disease.About EIP Pharma LLC