Exelixis's drug Cabometyx outperformed Pfizer's Sutent in a clinical study for the treatment of metastatic kidney cancer, suggesting it has the potential to become a first-line treatment, researchers said on Monday.

The drug is currently approved only in patients who have already received prior therapy, while Sutent is cleared for initial use. However, hopes have been building for the Exelixis product in recent months, buoying the firm's shares. 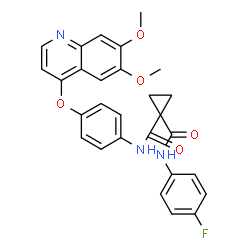 The Phase II study results presented at the European Society for Medical Oncology congress showed a 31 percent reduction in disease progression or death among patients on Cabometyx compared to those on Sutent. People on Cabometyx on average went 8.2 months before their disease worsened against 5.6 months for those taking Sutent.

"This data shows that cabozantinib (Cabometyx) has the potential to become a first-line standard treatment," said study leader Toni Choueiri of the Dana-Farber Cancer Institute in Boston.

Exelixis said it planned to file for U.S. regulatory approval to sell Cabometyx as a treatment of first-line advanced kidney cancer on the basis of the latest clinical data.

Commenting on the findings, Bernard Escudier of France's Institut Gustave-Roussy recommended additional studies using the drug in the first-line setting but said the results raised hopes for further improvements in treatment.

Ipsen has rights to Exelixis's drug in some markets.

Pfizer, meanwhile, had more positive news for its established medicine Sutent with a Phase III study showing that it worked well in patients who had part or all of a kidney removed.

Disease-free survival was 6.8 years with Sutent against 5.6 years with a placebo in the trial, which was the first to show such an improvement in the post-surgery setting.