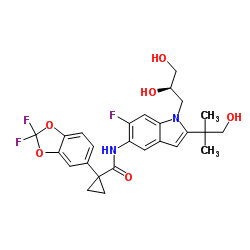 BOSTON, MA, USA - August 15, 2016 - Vertex Pharmaceuticals Incorporated (Nasdaq: VRTX) today provided an update on its ongoing Phase 3 development program of its investigational compound VX-661 in combination with ivacaftor, which includes four studies that together are expected to enroll more than 1,000 people with cystic fibrosis (CF). Based on a planned interim futility analysis conducted by the study’s independent Data Safety Monitoring Board (DSMB), Vertex plans to stop the study of VX-661 and ivacaftor in people with one copy of the F508del mutation and one copy of a mutation that results in minimal CFTR protein function (F508del het/min). There were no safety concerns noted in the DSMB’s review of the data. Vertex also today announced that enrollment is now complete in the study of VX-661 and ivacaftor in people with two copies of the F508del mutation (F508del homozygous) and that the company expects to complete enrollment in the study of people with one copy of the F508del mutation and one copy of a residual function mutation in September.“While we recognize that people with CF with minimal function mutations have a form of the disease that is particularly difficult to treat, we believed it was important to evaluate whether a dual combination of VX-661 and ivacaftor could provide some benefit to these patients given they do not today have a medicine to treat the cause of their disease,” said Jeffrey Chodakewitz, M.D., Executive Vice President and Chief Medical Officer at Vertex. “These results suggest that a triple combination regimen may provide this group of people with CF the best chance at obtaining a meaningful benefit and we look forward to beginning the first study of a next-generation corrector together with VX-661 and ivacaftor in this group of patients later this year, pending data from our ongoing Phase 1 studies in healthy volunteers.”The VX-661 Phase 3 program includes four Phase 3 studies in multiple different groups of people with CF who have at least one copy of the F508del mutation. The studies are evaluating VX-661 dosed as 100 mg once daily (QD) in combination with ivacaftor dosed as 150 mg every 12 hours (q12h). These studies include people with CF with the following mutations:

Two Copies of the F508del Mutation: In August, Vertex completed enrollment in a study evaluating 24 weeks of treatment with VX-661 in combination with ivacaftor in approximately 500 people with CF who have two copies of the F508del mutation. Data from this study are expected in the first half of 2017.

One Copy of the F508del Mutation and a Second Mutation that Results in Residual CFTR Function: In September, Vertex expects to complete enrollment in a study evaluating VX-661 in combination with ivacaftor in approximately 200 people with residual function mutations. The crossover study includes two 8-week dosing periods, separated by an 8-week washout period. The study includes an arm of ivacaftor monotherapy, in addition to an arm evaluating VX-661 in combination with ivacaftor and a placebo arm. Data from this study are expected in the first half of 2017.

One Copy of the F508del Mutation and a Second Mutation that Results in a Gating Defect in the CFTR Protein: Enrollment is ongoing in a study designed to evaluate VX-661 in combination with ivacaftor in people with gating mutations that have been shown to be responsive to ivacaftor alone. The study is expected to enroll approximately 200 patients and is evaluating 8 weeks of treatment with VX-661 in combination with ivacaftor. Enrollment is expected to complete in late 2016 or early 2017.

One Copy of the F508del Mutation and a Second Mutation that Results in Minimal CFTR Function: In April, Vertex completed enrollment of approximately 150 people in Part A of a two-part study evaluating people with mutations that result in minimal CFTR function. A planned interim futility analysis was conducted by the study’s independent DSMB after at least 8 weeks of dosing to determine whether to stop the study or to continue the study and initiate enrollment in Part B. The analysis showed that the combination of VX-661 and ivacaftor did not result in a pre-specified improvement in lung function. The DSMB recommended that Vertex stop the study and not initiate enrollment in Part B. There were no safety concerns noted in the DSMB’s review of the data. Vertex plans to close this study based on the recommendation of the DSMB, and patients from Part A of the study who enrolled in the long-term extension study will be transitioned off the combination of VX-661 and ivacaftor.

Vertex plans to submit a New Drug Application (NDA) to the FDA for VX-661 in combination with ivacaftor in the second half of 2017, pending data from the Phase 3 program. The NDA is expected to include data from the study in people with minimal function mutations.About Cystic FibrosisCystic fibrosis is a rare, life-shortening genetic disease affecting approximately 75,000 people in North America, Europe and Australia. Today, the median predicted age of survival for a person with CF is between 34 and 47 years, but the median age of death remains in the mid-20s.CF is caused by a defective or missing CFTR protein resulting from mutations in the CFTR gene. Children must inherit two defective CFTR genes — one from each parent — to have CF. There are more than 1,900 known mutations in the CFTR gene. Some of these mutations, which can be determined by a genetic, or genotyping test, lead to CF by creating non-working or too few CFTR protein at the cell surface. The defective function or absence of CFTR proteins in people with CF results in poor flow of salt and water into and out of the cell in a number of organs, including the lungs. This leads to the buildup of abnormally thick, sticky mucus that can cause chronic lung infections and progressive lung damage.About VertexVertex is a global biotechnology company that aims to discover, develop and commercialize innovative medicines so people with serious diseases can lead better lives. In addition to our clinical development programs focused on cystic fibrosis, Vertex has more than a dozen ongoing research programs aimed at other serious and life-threatening diseases.Founded in 1989 in Cambridge, Mass., Vertex today has research and development sites and commercial offices in the United States, Europe, Canada and Australia. For six years in a row, Science magazine has named Vertex one of its Top Employers in the life sciences. For additional information and the latest updates from the company, please visit www.vrtx.com.SOURCE: Vertex Pharmaceuticals