The European Commission has approved Vertex’ Symveki in a combination regimen with Kalydeco to treat certain patients with cystic fibrosis (CF). 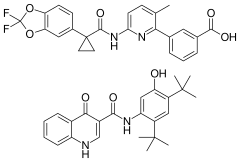 Marketing Authorisation was based on data from two pivotal Phase III studies, EVOLVE and EXPAND, published in the New England Journal of Medicine in November last year.

The most common adverse reactions experienced by patients who received tezacaftor/ivacaftor in combination with ivacaftor in pooled, placebo-controlled Phase 3 studies were headache and nasopharyngitis.

Approval of Symveki/Kalydeco “marks an important milestone for many CF patients in the UK, including those who so far have had no available option to treat the CFTR protein defect responsible for their disease,” said Simon Lem, regional general manager Northern Europe for Vertex.

He went on to note that with the approval the firm is “rapidly moving towards treating 90 percent of CF patients”, and confirmed that Vertex is “discussing tezacaftor/ivacaftor as part of our ongoing discussions with the reimbursement authorities across the UK with the aim of ensuring that eligible patients in the UK have access to our CF precision medicines as soon as possible.”